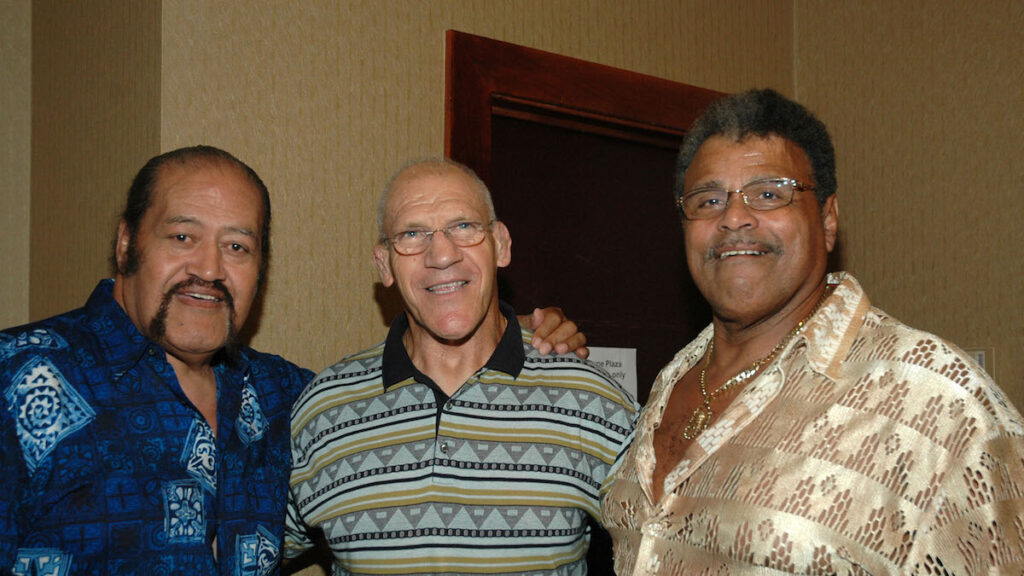 Dwayne ‘The Rock’ Johnson might seem like the ultimate people person, but there’s someone he never had an easy time getting along with: his own father.

The Jungle Cruise star had one of, if not the most interesting transition to Hollywood out of anyone in the industry, and to no one’s surprise, his upbringing had been just as fascinating and chaotic. He’d lived in 13 different states by the time he was 13, been arrested for fighting, check fraud, and theft by  17, and was trained among a crew of renowned, hardy wrestlers throughout his entire childhood, including his father, Rocky Johnson.

Dwayne has always maintained that this relationship with Rocky had been “complicated,” but he couldn’t comprehend just how intricate and messy it had been until the elder Johnson’s death in January 2020. What happens when one of your biggest heroes and influences in life also happens to be the same person who’s inflicted unimaginable pain and trauma on him?

It’s an exasperating landscape to navigate, especially when you’re trying to set an example for your own offspring. Here’s how Dwayne dealt with the loss of his father:

Dwayne idolized his dad as a child, but over the years, their loved waned

In a revealing Vanity Fair profile, Dwayne lays bare the harsh realities of growing up in a wrestling family and its consequences on interpersonal family dynamics.

Back in the day, there was no money in the profession. Dwayne’s dad, Rocky, was constantly on the move to find work, whether it was five miles away or across the Pacific Ocean. Dwayne tagged along, hoping their luck would eventually strike and that they would be able to build long-term stability in one place or the other; unfortunately, this never materialized.  His dad was a man of discipline and rigor, as is needed if you’re making your living in wrestling matches, but his treatment of his son was just as harsh and cold and “fueled by tough love.”

In addition to his unflinching personality, Rocky was also a serial adulterer. He kept sleeping with other women while married to Dwayne’s mom, Ata, and because of his largely nomadic lifestyle, he was able to get away with his philandering for years and years without a hitch. When his mother caught an inkling, she confronted him immediately, resulting in a “not physical, but a massive fight.” It had turned so brutal that, at one point, Ada tried to end her life by walking out into traffic. Thankfully, Dwayne rescued her just in time, but the feeling of shock is still seared into his mind. “I started caring that night. I’ll never forget it,” he said.

The incident single-handedly shattered his relationship with his dad. It “triggered a real anger for my dad,” said Dwayne, adding that they were never able to restore their bond to its former glory, though it wasn’t very powerful in the first place.

The irony is I f***ing idolized my dad as a boy, [..] And obviously that idealization started to wane over the years. But the older I got, and the more experienced I got, the more I could appreciate his love for me in that limited capacity.

Over the years, the relationship improved, but it “would never get easy.” So Dwayne simply had to shift his perspective and relearn how to love his dad in a “limited capacity.” Just because he was wounded by his old man doesn’t mean he would remain estranged for the rest of their lives. The father-of-three had to find the silver lining in the hurt, for his sake and that of his children, and it had been mostly manageable until Rocky Johnson committed a grave mistake in his final years.

The former WWE superstar told the magazine that when he learned his father had died, he “felt numb.” He did his best to recuperate and go about his day as if everything was normal, keeping in mind his father’s most commonly-used phrase, “The show must go on.” So Dwayne went to work and acted as professionally as one could under the circumstances. “Nobody needs to know that,” he explained. What Dwayne was going through in the immediate wake of his father’s passing is hard to characterize. It wasn’t just regret or loneliness; it was a sense of incompleteness he would never be able to fill.

In his 2019 memoir, Soulman: The Rocky Johnson Story, Rocky allegedly lied about crucial episodes from Dwayne’s early life. In one case, he claimed that they were never evicted from their Hawaii apartment when Dwayne was 14 and that this is a story Dwayne likes to share repeatedly to “make people feel good.” Dwayne couldn’t believe his father would accuse him of lying just to evade accountability.

If that wasn’t enough, the memoir’s introduction, titled ‘Foreword by Dwayne ‘The Rock’ Johnson’ featured the actor seemingly singing praises of his father’s contribution to his career, at one point saying, “Rocky Johnson is responsible for everything I’ve done in wrestling, the movies, TV shows and overall business opportunities.” There was only one issue: Dwayne had never said or written any of this. The book outright added a false foreword credited to Dwayne and completely fabricated his opinion of Rocky.

Naturally, Dwayne felt absolutely incensed and called his dad to get some answers. His dad denied knowing about the foreword mishap and attributed the error to his ghostwriters. “It was the biggest fight we’ve ever had, and we had gotten into some doozies in the past,” said Dwayne. He’s not the kind of person to let emotions “fester,” so if he had an issue with his dad, he would bring it up and try to “take care of it” no matter how difficult it became.

We had some good times. We had some rough times. […] The good stuff is what will always be in the forefront of my mind, because I recognize that in our complicated testosterone-driven relationship, some of the best parts of me that I’ve been fortunate to share with the world I get from him.

Unfortunately, this heated phone call was the last conversation the 49-year-old had with his dad. They ended their relationship without an apology or reconciliation, or any kind of closure. He will always be overcome with remorse for how the discussion panned out, but his hands are tied. If only he could have “another shot” with his dad, just so he could say goodbye properly, say ‘I love you,’ give him a hug, a kiss — anything at all.

Not everyone finds closure, and that’s okay

Dwayne’s fraught relationship with Rocky sounds rough and unforgiving, but at the end of the day, it’s not wholly different from the relationship we might have with our own parents. It can be complicated; you have to recognize the good and the bad, and acknowledge that some part of you is always going to carry them. It could be their best qualities, their worse impulses, or most likely, something in between.

Dwayne Johnson wasn’t able to say goodbye to his old man and didn’t necessarily find closure after their massive quarrel. However, such is life; not everything is laid out for you to find emotional relief and fulfillment. Situations will get uncomfortable, so you’ll have to muster up the strength to get through them with a clear head. If not, just cherish the moments you do spend with your loved ones. One day, that’s all you’ll remember.

Choosing to remember the good memories can help you move forward.

Go west, young man: Alberta sees largest wave of interprovincial migration since 2014
The Inspiring True Story of a Martian Invader | Cindy Healy | Goalcast
Employees Leaving Due to a Toxic Culture? Time to Renovate. (i4cp login required)
Podcast: The Habits You Take for Granted
How to Live Your Dharma (True Purpose): The Path to Soul-Level Fulfillment