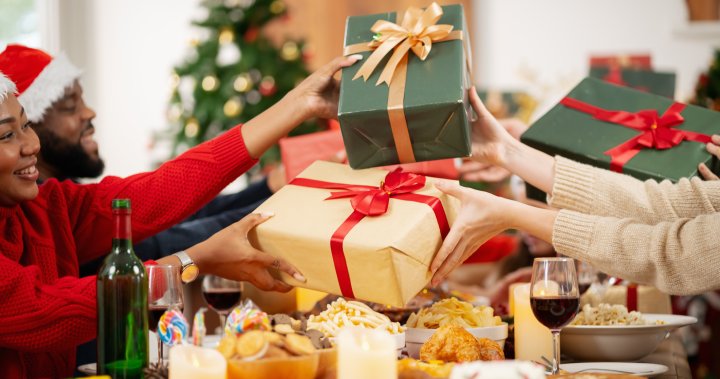 Christmas is over but the time for unwrapping gifts has just begun.

While everyone will surely appreciate efforts and be thankful, many Canadians will, from time to time, receive presents that they just don’t like. To make things worse, receipts may not be attached to gifts, so returning or exchanging them for something else could be an uphill climb — but there are options, says an expert.

According to etiquette consultant Susy Fossati, re-gifting what you don’t want to keep is an option, though it’s somewhat tricky.

“There’s so much to be said about re-gifting,” said Fossati. “And while many people think it is a faux pas, if it’s done correctly — there are many, many things to take into consideration when I say done correctly — re-gifting is okay.”

Re-gifting, according to Fossati, is acceptable as long as the package is not opened, and the item is in perfect, brand-new condition.

She says it is also important to make sure that it’s given to someone outside the circle of whoever gave the gift.

“You never want the person to ever find out that (their gift) was rejected.”

To avoid goof-ups, Fossati says people can use sticky notes to remind themselves who gave them the gift in the first place — so, when re-gifting, they will know which social circle to avoid.

Canada is fortunate to be a ‘country of peace,’ Trudeau says in Christmas message

She adds that it is always good to throw in a “personal touch” when giving an item away.

“Maybe when you gift someone a cheese board, be creative and include the person’s favorite cheese or a beautiful bottle of wine that would (compliment) the cheese,” said Fossati.

Re-packaging or re-wrapping the gift with one’s own papers and embellishments, and putting one’s own touch onto the gift will “go such a long way,” she added.

But one must be kind, even when the gift isn’t to our liking, says Fossati.

The number one rule is to be very kind and considerate to the person who’s giving us the present — even if you don’t like the gift, she advised.

“Keep a very neutral face, because you always want to look very enthusiastic once you open the gift, whether you like it or not, just out of politeness,” said Fossati.

“You’re always going to (want to) look very, very happy, because the most important thing that we want to do is to focus on the gesture and not the gift itself.”

Giving back to the community by donating unwanted gifts is also an option.

For books in good condition, some local libraries accept donations. The Toronto Public Library, for example, has two volunteer-run bookstores, both called BookEnds, that sell second-hand books to raise funds for supporting library programs and services.


Dropping off items at thrift stores such as Value Village or Salvation Army is another viable option. This would allow stores to re-sell your items at a more affordable price to those in need.

New and unwrapped toys, games and crafts can be donated to children’s hospitals, as well.

Some shelters, such as Covenant House Toronto and Nisa Homes, accept gift cards as donations, too. Cards from fast food restaurants, retailers and grocery stores allow those in need to have some choice in purchasing what they need.

Local “Buy Nothing Groups” are also a great option for people to give away unwanted gifts.

The idea of Buy Nothing was founded in the U.S. in 2013 by Rebecca Rockefeller and Liesl Clark, encouraging a gift economy where community members give away items for free so someone in their neighbourhood can make use of them.

There is usually no buying, selling, trading, bartering, or money exchange involved, as the founders believe “a gift economy’s real wealth is the people involved and the web of connections that form to support them.”

What are ‘Buy Nothing’ groups? Experts say trend can help Canadians handle inflation

How most returns and exchanges work

For most big box retailers, returns and exchanges are straightforward, if you know the rules.

Indigo, one of Canada’s largest book and lifestyle retailers, accepts items with gift receipts returned to any location within 30 days from the date of purchase. They can also be exchanged for merchandise, or the amount can be added to a gift card.

For in-store purchases with no receipt, the store can look up details of the transaction for the client on the spot and offer solutions, provided they can offer enough information on the purchase, according to Indigo’s customer service.

Scrambling for a gift exchange present? 14 great options for under $25 (or so)

As for Costco, the company states on its website that customers may return the merchandise for a full refund as long as it is in the original packaging, within 30 days of purchase and is accompanied by a Costco receipt.

Costco says, generally, a receipt is not needed as they only need the customer’s membership card and the purchased item for a refund or exchange.

If you received a gift through Amazon.ca, the online retailer would usually offer returns for items within 30 days of receipt of shipment. However, the return timeframe for the 2022 holiday season has been extended — most items purchased between Oct. 11 and Dec. 25 can be sent back until Jan. 31, 2023.

An order number, which can be found on the packing slip, is required for the return process to be carried out. Customers might be asked to contact Amazon if they do not have the order number.

A return shipping cost will be refunded if the items qualify for free return or if the return is a result of Amazon’s error.

Most fashion retailers, like Zara and H&M, only allow returns when there are receipts or online equivalents. However, some makeup merchants, like Sephora, allow customers to return or exchange new or gently used items without a receipt, but only if they can find a transaction history of the product within their system.