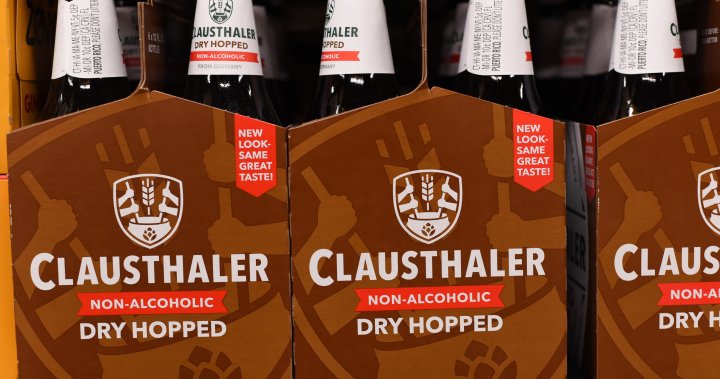 With the holiday season in full swing and “Dry January” around the corner, Canadians who don’t drink alcohol or want to cut back may find more options on menus and store shelves.

Beer giants are launching non-alcoholic brews, specialty producers are creating innovative alternatives to spirits and those in the industry say it’s becoming more socially acceptable to be “sober curious” — a term used to describe people dipping their toes in the non-alcoholic waters.

“Ten years ago, you would go into a party with a non-alcoholic beer, and people would ask you if you’re pregnant or sick,” said Nicolas Gagnon-Oosterwaal, president and co-founder of Montreal-based brewery Sober Carpenter.

“But now … it’s completely the other way around.”

Global Market Insights estimates that worldwide, the non-alcoholic beer market was worth more than US$22 billion in 2022 and will be worth almost double that in a decade.

“What happened for craft beer in the last five, 10 years, I think will happen in the next five, 10 years for non-alcoholic (drinks),” Gagnon-Oosterwaal said.

Non-alcoholic beer has been around since medieval times and was promoted during Prohibition. And don’t forget the Shirley Temple, an alcohol-free cocktail invented almost a hundred years ago. But companies have long struggled to make a non-alcoholic beer that was more than just drinkable.

German-based brewery Clausthaler calls this the “holy grail of non-alcoholic beer,” and they did something different to try and achieve it: instead of removing the alcohol from beer, they found a way to halt fermentation before the alcohol developed.

6:26
Bin 104 Fine Wine & Spirits has something for everyone — dry January or not


More than four decades after Clausthaler launched its product in 1979, the non-alcoholic holy grail hasn’t just been found _ it’s everywhere.

There are non-alcoholic sour beers, stouts and IPAs. There are ciders, and there are red, white and rose wines. There are also non-alcoholic spirits, which mimic the taste of rum, gin or even absinthe. (Many non-alcoholic products actually contain a tiny amount of alcohol _ 0.5 per cent or less, or around the same as kombucha, while others contain zero per cent.)

There are many reasons why someone might drink less or not at all. For people dealing with alcohol addiction, often sobriety is the healthiest choice. Some religions prohibit drinking alcohol.

Alcohol also has negative health effects. Some people have an alcohol intolerance or allergy and many common drugs interact badly with alcohol.

And, in recent years, more people are participating in “Dry January,” where they give up alcohol for the first month of the year.


Joel Gregoire, associate director for food and drink at market research company Mintel, said younger generations appear to be driving the growth in non-alcoholic drinks, noting that many consumers buying these beverages aren’t avoiding alcohol entirely, but cutting down.

In a 2021 survey by Statistics Canada, around one in five Canadians said they’ve been drinking less than they did pre-pandemic, and among those aged 15 to 29, one third had decreased their consumption.

There’s a social side to alcohol that makes it difficult for many to replace, said Gregoire. That’s why many consumers are drawn to non-alcoholic versions of things like beer or wine, instead of simply ordering a Pepsi.

“For those who just are choosing not to drink for whatever reason … it still allows them to have maybe more of a premium or enjoyable experience.”

The Liquor Control Board of Ontario started stocking non-alcoholic drinks in 2018, and today carries 16 different products, including beer, wine, a spirit and a mixed drink. It’s launching five more wines and two more beers next year, and says sales of these products have grown 20 per cent in the past year.

Sales have also been growing exponentially for Sober Carpenter since launching in 2019.

“When we started to talk to retailers four years ago about this, people were saying ‘why do I need this?”’ Gagnon-Oosterwaal said.

As he watched the craft beer movement grow over the years, Gagnon-Oosterwaal noticed non-alcoholic beer wasn’t getting the same treatment, prompting him to create Sober Carpenter.

Now, using the arrested-fermentation style of brewing, Sober Carpenter cans are sold in stores across Canada and the world.


Beer Canada estimates that non-alcoholic beer sales volumes are growing far faster than most alcohol categories, at 22 to 25 per cent. Labatt Breweries of Canada, home to brands like Budweiser, Corona and Mill Street, said not only are sales volumes increasing, but revenues are too as more premium and craft brands hit the market.

Beer is by far the biggest category in non-alcoholic beverages, with wine a distant second.

Spirits, meanwhile, are a much newer and smaller category, said Bob Huitema, who launched Sobrii in 2019.

Huitema, who got a deal on “Dragon’s Den” last year, started developing his line of non-alcoholic spirits in 2017 because he loved cocktails, but hated hangovers.

He said other markets, such as the U.K., are further ahead than Canada when it comes to non-alcoholic spirits, which can make the business frustrating at times, but it also means there’s untapped opportunity out there.

Non-alcoholic beverages also often cost just as much as their alcoholic counterparts, because they’re just as complicated to make.

“I would even argue that you might have to nail the flavour more, because the person drinking it is not going to get buzzed,” Gregoire said.

The early days of non-alcoholic beer left a stigma of sub-par taste, but technology has changed that, said Labatt’s Brian Kuhn, vice-president of Beyond Beer, in an email.

And just like Clausthaler in the 1970s, companies are still looking for new ways to make these drinks.

At Sober Carpenter, the brewery found a way to make non-alcoholic cider, and has started doing smaller batches of limited-edition specialty beers alongside their usual offerings.

Gagnon-Oosterwaal doesn’t see non-alcoholic beverages as a passing fad. Like meat alternatives, he thinks the non-alcoholic drink industry will continue to grow and improve.

“I think that the trend of making healthier decisions, cutting out alcohol, is (here) to stay.”

‘Gen Z yellow’: Next ‘it’ colour or marketing ploy?
Sweet Revenge: Woman Wins Lottery Jackpot After Husband Leaves Her for Best Friend
The two kinds of productivity advice
The Choice We All Have , But Only a Few Apply It | Joe Dispenza
Parents issue warning after teen dies from inhaling aerosol deodorant