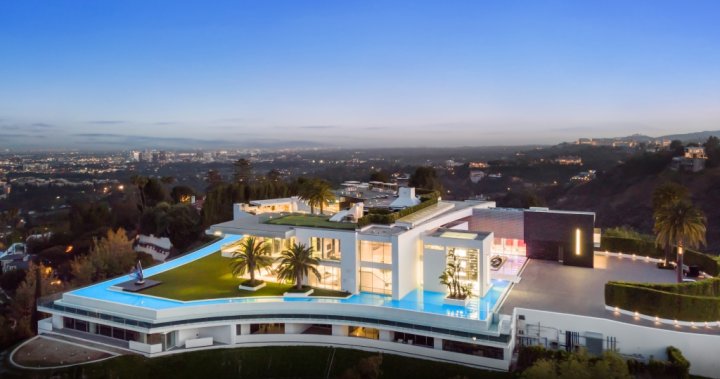 An astonishing mega mansion located in one of America’s ritziest zip codes is set to hit the auction block and could go for a terrific bargain — relatively speaking.

The estate, simply named “The One,” was once estimated at US$500 million and held the title of the most expensive house for sale in the United States.

Now, the Bel Air, Calif., estate will be listed for $295 million and head to an online auction in February, reports Realtor.com.

With 105,000 square feet of living space, the home features 21 bedrooms and 49 bathrooms (but only 42 of the bathrooms are full bathrooms, for the record).

Three sides of the house are surrounded by a moat the size of a river, which also doubles as a pool, in case you want to take a break from swimming in the home’s 64-foot indoor pool.

There’s also a 30-car garage, complete with a two-car display turntable, as well as a 10,000-square-foot party deck and putting green.

And you could fit two regular-size homes inside the 5,500-square-foot master bedroom.

If you’re feeling ultra generous on any given day, you can head over to the home’s “philanthropy wing,” which features areas to host fundraisers and a gala ballroom that holds 200 people.

And if those features aren’t enough of an incentive, all the furniture and an extensive (very expensive) art collection are included for the home’s highest bidder to enjoy.

Real estate agent Aaron Kirman, owner of one of the real estate companies working to sell the home, told CNN the property is “the Mona Lisa of the residential world.”

The mansion was an ambitious project dreamed up by real estate developer Nile Niami, who first bought the land in 2012 for $28 million.

Niami commissioned the spec home, with a proposed price tag of half a billion dollars, according to the Los Angeles Times.

Niami racked up $180 billion in debt to multiple lenders on the property while in the 10-year building process, and in December his company filed an agreement in U.S. Bankruptcy Court to auction off the house.

Now, he’s asking someone to “walk into the stratosphere” with him, releasing a video on Dec. 17, 2021 to YouTube, which is essentially a last-ditch effort to find an investor and keep the house off the auction block.

Kirman thinks that however the saga plays out, it will definitely take someone from a very specific income bracket to save the house.

“The only thing that’s certain is that you really have to be a billionaire to buy this property,” he told Robb Report.

If the home sells, even at the discounted asking price, it will be the most expensive house ever sold at auction.

Bidding in the no-reserve auction is scheduled to take place Feb. 7 to 10 via Concierge Auctions’ online marketplace.

5 Ways to Start Healing from the Grief of Betrayal and Domestic Abuse
COMMENTARY: I was diagnosed with cancer at age 36. My life will never be the same
Here’s the cover of my next book! 🎉
My Deepest, Darkest Secret: Why I Never Felt Good Enough
Couple Has Been Divorced for 28 Years – But, Woman Notices Her Dad at Her Mom’s House for This Surprising Reason