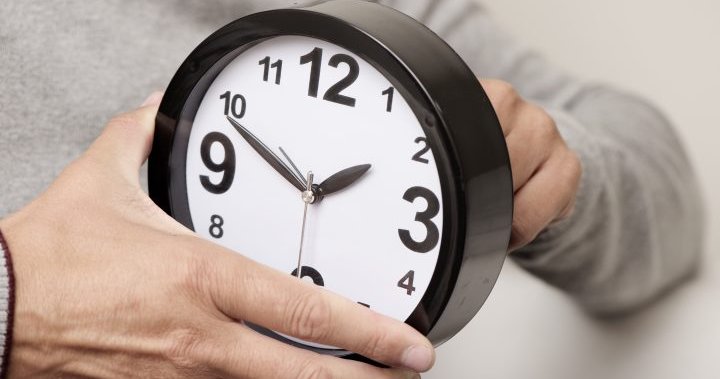 Mark it in your calendars now, so you don’t show up to work an hour early on Monday.

Most Canadians will turn their clocks back an hour, giving adults an extra hour of sleep and making the next couple of weeks a bit hellish for parents of young children.

2:13
Why do we observe daylight saving time and when did it start?


Before you go to bed on Saturday night, make sure to manually adjust your clocks. Your digital and wifi-connected devices should adjust automatically. Those living in Yukon, most of Saskatchewan, and some parts of B.C. and Quebec don’t have to do anything, as they stay on standard time year-round.

The changing of the clocks has been a topic of debate in Canada for many years, with provincial politicians in Alberta, B.C. and Ontario wanting to scrap the century-old practice.

Ontario tabled and unanimously passed a private member’s bill called the Time Amendment Act in 2020. They’re waiting for New York and Quebec to get on board, as the areas share trade and the federal government is spread across the two provinces.

Time Change: 9 things you didn’t know about DST around the world

The B.C. legislature passed similar legislation in 2019, but the process has been delayed, as American states in the same time zone wait for California to pull the trigger.

Alberta had a referendum on the idea last year, and just over half of those who voted wanted to keep daylight saving time.

Daylight saving time was first proposed in 1895 by New Zealand entomologist George Hudson. He proposed the change because it would allow him more daylight hours to find and inspect insects.

7:10
How to best prepare for daylight savings and the darker days


The first documented cases of daylight saving being adopted in the world happened right here in Canada. The small towns of Port Arthur and Fort William — which would eventually merge to become Thunder Bay, Ont. — adopted daylight saving on May 1, 1908.

One resident, John Hewitson, wanted to give working folk an extra hour of daylight for after-work leisure activities.

Several years later, the German Empire and Austria-Hungary were the first international countries to enact daylight saving time in 1916, as a way to save coal and fuel during the First World War.

The idea behind the clock shift is to maximize sunlight in the Northern Hemisphere, as days start to lengthen in the spring and then wane in the fall. The logic is that by springing forward and falling back, people add an hour of sunlight to the end of the workday. But the benefits of this change are controversial, and the shift can have measurable impacts on health.

Doctors from the University of Turku in Finland have suggested that the risk of strokes and heart attacks increases by seven per cent following the time change.

In addition, the number of car crashes also tends to increase once we make the time shift. (A study in the New England Journal of Medicine reported there was an eight per cent jump in car crashes the day after a time change.)


Canadian researchers warn that daylight saving, and switching the clocks twice a year, can contribute to a phenomenon known as “social jet lag,” where people suffer from disrupted sleep and sleep debt, mental and physical fatigue, metabolism issues and more.

With less evening light and shortened days, there is a tendency to be less active in the evening, Wendy Hall, a B.C. nurse and professor emeritus at the University of British Columbia, told Global News last year.

The return to standard time in the fall has also been linked to depression because of seasonal affective disorder, where people get depressed because of shorter exposure to daylight, Hall said.

2:13
Why do we observe daylight saving time and when did it start?

How to Be Intolerant of Dysfunction | Josh Shipp | Goalcast
This Is How You Become the Best Version of Yourself in One Step | James Lawrence | Goalcast
Watch the Breathtaking Moment a Family Finds Their Missing Son Lost at Sea as Part of Viral Rescue Mission
It Takes One Person To Make You Feel Like You Matter | Kyle Scheele Inspirational Speech | Goalcast
‘Gen Z yellow’: Next ‘it’ colour or marketing ploy?