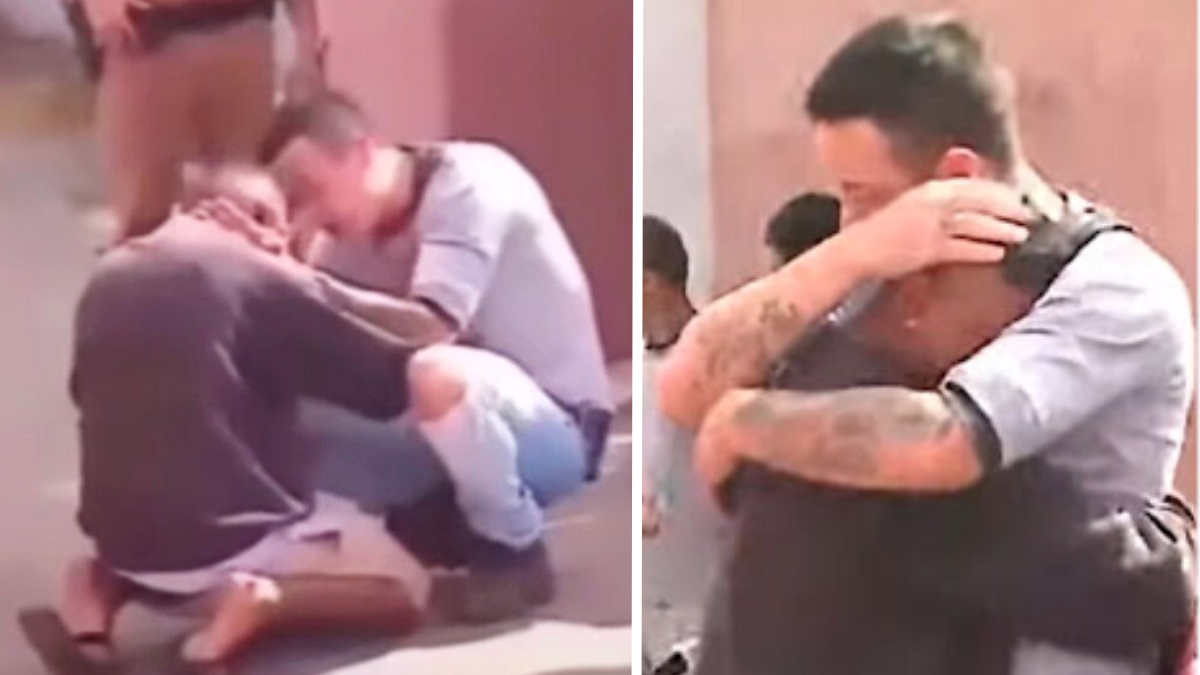 A little compassion can go a long way. Seeing your child get hit by a car is many parents’ worst nightmare. Yet how many mothers or fathers in that situation would stop and take a minute to console the person who accidentally hit their kid?

This father in Brazil did, and now video of the event is sending a powerful message around the world.

A powerful moment of compassion

In November, a 10-year-old girl named Haghatta ran into the street to chase a ball without looking. A man driving his car saw her at the last minute and he hit his brakes, but he just couldn’t stop in time. Naturally, he was beside himself with guilt and worry when he realized he had hit the girl. He got out of his car and started crying in the street.

That’s when Haghatta’s father stepped in. Although the man was concerned for his daughter, she wasn’t gravely injured and first responders were there. He knew the entire situation was an accident, and so he did the most compassionate and unexpected thing possible: he consoled the stranger in his own time of need.

In a video shared by Good News Movement, you can see the father walking up to the man and hugging him. He holds the man’s face in his hand and looks him right in the eye, appearing to tell him that things will be all right.

When the driver falls to the ground on his knees in grief that father stays with him, continuing to console the devastated man. It’s a strong moment of kindness and empathy that is now inspiring the millions of others who have since seen the video.

Haghatta’s injuries were bad enough that she needed to be hospitalized for a week, but she has since been released and is back at home. There, her father continues to be a shining example of the power of forgiveness, as he later invited the driver over to their house so that he could see that the 10-year-old is indeed okay now.

At the end of the video are two photos, in which you can see the girl and the driver first sitting together on the couch and then hugging. They’re heartwarming snapshots that radiate relief and love, reminding us all that bad things can happen to anyone, but it’s how you deal with these situations and treat others that truly matters.

People commented on the video in emotional ways:

So glad the little girl is recovering. It was so kind of the father to console and forgive the driver who was obviously distraught about the horrible and scary accident.

“This is absolutely amazing! What an amazing man that father is. And I am so grateful, for the girl and her family, but also for the driver, that she is OK,” said another user @debbiech03.

Walking in someone else’s shoes

In that particular moment, no one could have consoled the stranger the way the father did, which is why the video is so powerful. How many of us would put aside our own feelings of anxiety, worry, and maybe even anger in a situation like that in order to help someone who caused a loved one harm- even if it was an accident? It takes a very strong person to be able to show that kind of love in such a potentially dire situation.

It’s a mighty reminder that you never really know how someone else is feeling or what they may be going through. So the next time someone is grumpy or appears to be taking something out on you, maybe try and put yourself in their shoes and invoke a little of this father’s kindness. Putting your own feelings and needs aside in order to show a struggling person a little compassion could just be a major turning point in that person’s life.

“Compassion is to look beyond your own pain, to see the pain of others.” – Yasmin Mogahed

Grieving Mother Honors the Memory of Her Young Daughter With a Gift to a Stranger – The Note She Writes Moves an Entire Toy Store to Tears
300 Pound 28 Year Old With A Brain Tumor Inspires Millions! | Charlie Jabaley Speech | Goalcast
YOU CAN ACHIEVE ANYTHING YOU WANT | Vice Admiral Bono Motivational Speech | Goalcast
An 8-Year-Old’s Dad Tragically Took His Own Life – So She Starts a Lemonade Stand to Prevent More Kids From Losing Their Parents
How I Went From High-School Drug Dealer to Startup Millionaire | Gerard Adams | Goalcast