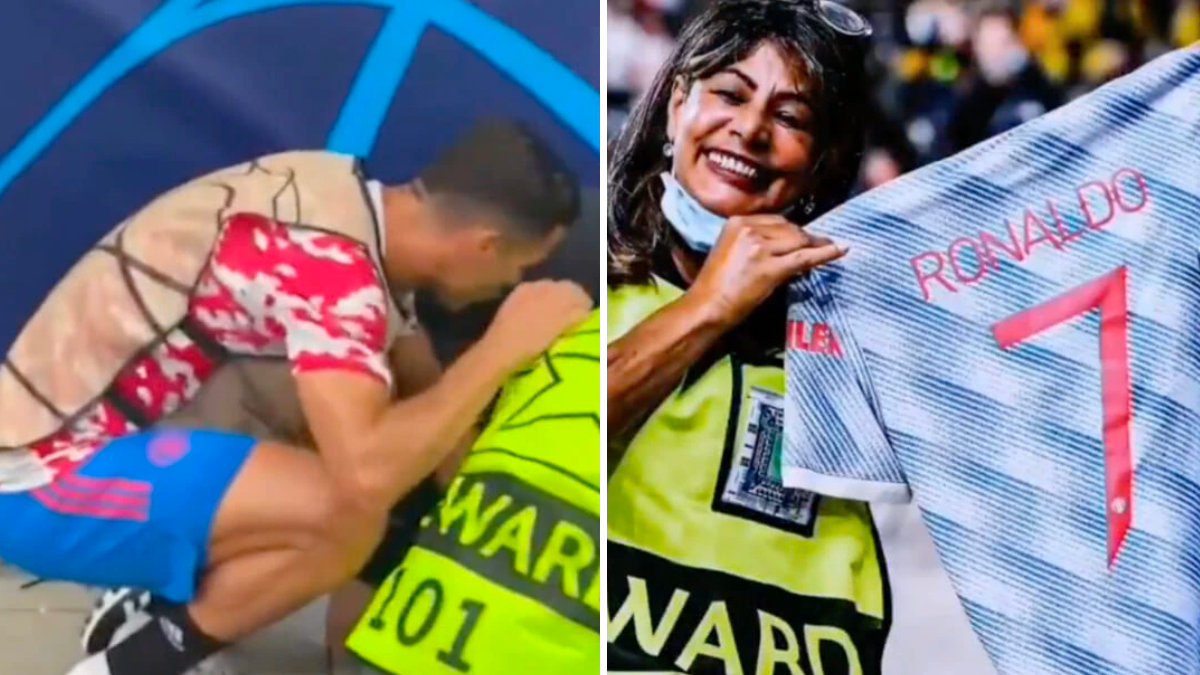 Even some of the best soccer players in the world need to work on their aim.

And that includes Cristiano Ronaldo.

The Portuguese football star had one of his kicks go wayward and it unluckily struck a sideline steward (or ball marshal) in the head.

But being one of the greatest athletes in the world doesn’t mean he has no decency. The 37-year-old forward had the mindset to make sure the lady was okay.

The lady was knocked to the ground after an errant kick by Ronaldo during warm-ups hit her in the head.

RELATED: Japanese Boy Bullied for Speaking Portuguese to Cristiano Ronaldo – What Happens Next Is Inspiring

He’s one of the greatest soccer players to ever live and there’s a reason he’s called a striker.

Prior to Ronaldo’s Machester United Champions League match versus the BSC Young Boys, one of the striker’s ball kicks went toward the stands.

A video of the incident shows the ball sail over the goalie’s net and hit the lady in the head, while she wasn’t looking.

It’s an instance of bad luck. But, at least she got to enjoy a moment with Ronaldo — that type of good luck-bad luck.

RELATED:  Cristiano Ronaldo Reveals He Begged for Food When He Was 12 – But One McDonald’s Employee Saved Him Each Night

In footage posted to social media, the world-famous soccer star can be seen jumping the sidelines and walking towards the lady as other stewards tended to the woman.

The lady was later seen smiling and in good health after Ronaldo gifted her one of his jerseys.

Ronaldo went on to score a goal for Manchester United, but the team came up short to BSC Young Boys and lost 2-1.

After the game, the star forward admitted the game (and his wayward shot) “wasn’t the result we wanted, but now it’s time to recover well and focus on the next game!” he said on social media.

Ronaldo — often considered one the great soccer players ever — has an impressive history of soccer accolades. He’s a four-time FIFA World Cup champion, has three English Premier League titles, two English League Cup championships, and he can now add a “good guy check-up” after his kick-gone-wrong.

RELATED: Soccer Legend Neymar Gives Back to Fans at a Charity Game — By Stripping Down to his Underwear

Ronaldo previously played with Manchester United for six years from 2003 to 2009. The father of four then played for nine years with Real Madrid from 2009 to 2018 before returning to Man U in 2021 for one year.

All was well for the steward who was seen happily posing with her new gift, an authentic Ronaldo jersey hand given to her by the world-famous athlete.

At least Ronaldo understands the importance of doing what’s right, even after an accident.

Many of us might take that trade: the chance to meet Ronaldo for a ball to the head…

How I Stopped Worrying About Running Out of Time to Achieve My Goals
‘Gen Z yellow’: Next ‘it’ colour or marketing ploy?
Haute couture goes ‘surreal’ and upside-down at Paris fashion show
The Rise of RockyNoHands | The Gamer Who Can Beat You At FortNite With His Mouth | #goalcast
Four Priorities for Talent Acquisition Leaders in 2023 (i4cp login required)