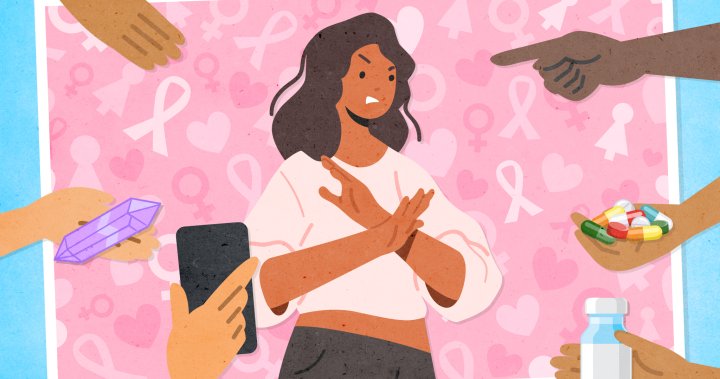 Shortly after I was diagnosed with breast cancer, something unsettling began to happen.

It started out innocently enough. Someone would send me a direct message on Instagram or Facebook. “Hey, I’m really sorry to hear what you’re going through. I have something that might help you, though…,” was often the tone of the opening pitch.

At first I was naïve, and a little bit desperate. Cancer treatment sucks and I was eager to have any help I could get.

But, by replying, I was taking the bait.

“I have this oil that could really help you. It’s helped so many people keep their cancer at bay. I’d be happy to send you a sample and, if you like it, I can offer you a discount on a three month supply,” read the first of many pitches I received.

In this first instance, there was also a link to a dubious-looking website, complete with “patient” testimonials claiming this particular type of ingestible oil had stopped their cancer from growing or, even better, had cured their cancer entirely.

It was obvious to me this was very clearly what’s referred to as “snake oil” — a product with no real medicinal value that was being sold as a remedy for my disease.

I’ve always been quite wary of online marketing scams and sketchy sales tactics, and it was easy to see through this common swindler’s trick. But for every transparent scam, there were a dozen more pitches that were far more sneaky.

Most of the time it was a female friend (or a friend-of-a-friend) sliding into my DMs, attempting to sell me on an essential oil, a weight-loss shake, a product to stimulate hair growth, or some other type of miracle that they claimed would make my cancer experience more tolerable.

And while the pitched product varied, there were always two common underlying threads: Each one was being sold by an associate involved in multi-level marketing (MLM), and each person was treating my unfortunate health crisis as a way to make money for themselves.

I was happy to receive these pitches at first. I was grateful that someone was thinking of me and I took each offer as a sincere effort to help. I even parted with some of my money in those early days, because I wanted to believe that these people were helping me and I was supporting them in return.

But the pitches, which started to come almost daily, became burdensome and my feelings quickly began to sour. It wasn’t just my acquaintances that were pitching anymore. It was anyone who stumbled across my story on social media.

Soon, I was angry and astounded at the sheer audacity of these women. How dare they use me, in my fragile and vulnerable state, as a means to make money and grow their sales base?

Deep down, I know I shouldn’t be surprised. There’s well-documented evidence that many of these MLM organizations use predatory tactics to shill their wares, and often the sales associates, desperate to climb the corporate hierarchy and claim the riches and rewards promised to them, are willing to do whatever it takes to make it to the next level, including preying on those with chronic or life-threatening illness.

Laughing in the face of cancer: Conquering a dark diagnosis with even darker humour

Someone literally tried to sell me crystals, saying they’d help purify my body and make it so the cancer wouldn’t be able to take hold.

Despite the treachery of such offers, I think that 90 per cent of the time these people were coming from a good place. Perhaps they truly believed in the magical (but often misleading) properties of these products; I don’t believe anyone was out to actively harm me.

But here’s the thing these sales people need to be aware of. The first and best line of defence for someone with an aggressive form of cancer are scientifically-proven methods — stem cell transplants, chemotherapy, radiation, surgery. There are often holistic treatments that can help with side effects and contribute to overall healing, but they need to be added to treatment only after serious consultation with one’s health-care team.


Oncologists often tell their patients to avoid certain foods, vitamins, supplements and even essential oils while going through cancer treatment. A lot of these products can diminish or negate the effects of chemotherapy and radiation. And no medical oncologist that I’m aware of has ever told a patient to add crystals to their cancer treatment plan.

Feeling like I was losing my mind, I sought out other people’s experiences with this. I posed the question to my local group of young breast cancer survivors: Have you ever experienced anything similar? (I’ve removed the identifying details of the answers to protect those who shared their experiences.)

It turns out I wasn’t alone. I received dozens of responses on that same post, with most people reporting back that they’d also received unsolicited pitches that were not only unwelcome, but potentially harmful.

These predatory pitches were just the beginning. As I got further along in my treatments and more familiar with the world of cancer, I began to realize another hard truth. It’s not just cancer patients that are being taken for a grift. The public, at large, is being duped out of money by organizations and businesses that claim they’re raising money in the name of “cancer awareness,” when, in fact, much of the money collected is not actually going to help cancer patients or research whatsoever.

It’s a phenomenon that becomes prominent during October’s Breast Cancer Awareness Month (BCAM) and it’s become so prevalent and problematic that it now has its own term: “pinkwashing.”

In October, the world becomes awash in hints of pink, appearing everywhere from the cleats of professional football players to lettuce packaging and yogurt containers. The ubiquitous pink ribbon — now the universal symbol for breast cancer — is one of the most misleading symbols in the charity world.

5:16
Outside the margins: BIPOC and LGBTQ2 breast cancer patients rewrite the narrative

Coined by Breast Cancer Action (BCAction), a grassroots organization based in San Francisco, pinkwashing is the promotion of a pink ribbon product by a company or organization that claims to support breast cancer charities, but doesn’t provide transparency about their involvement or products that are linked to the disease.

“Breast cancer is a social justice and public health crisis, and we’ve seen too little progress for the billions of dollars spent on pink ribbon products,” Karuna Jaggar, executive director of BCAction, told Global News in a previous interview.

For this reason, the organization launched the Think Before You Pink project with the goal of “peeling back the pink ribbon” and helping people determine if they’re buying a product that will actually benefit a breast cancer charity.

“This isn’t to say that pink products are bad. We just want people to look beyond the pink ribbon to know if something meaningful is happening,” Jaggar said.

Rethink Breast Cancer, a Toronto-based breast cancer charity for young women, calls for more transparency in breast cancer fundraising, saying that reputable campaigns “will be up front about the nature of their cause marketing partnerships, which should offer information like the percentage of sales going back to the charity, what the funds are supporting and if there’s a minimum/maximum cap on donations.”

Outside the margins: LGBTQ2 cancer patients can face big disparities in care, screening

The other area where breast cancer fundraising is woefully lacking is the area of patient support. Many survivors ask that people donate to organizations that dole out the money directly to cancer patients to help them offset some of the hidden costs of cancer, like unemployment, expensive drugs not covered by insurance and childcare assistance.

As it stands, “pinkwashing” has resulted in a bizarre collective understanding that breast cancer is the “good type” of cancer. Many fundraisers and campaigns, in an effort to whip up warm feelings about the disease and, in turn, raise more money, paint breast cancer as an inspirational (and sometimes aspirational) disease that’s easy to beat and portray survivors as inspirational figures that are forever cured from the disease and living their best lives.

What most of these campaigns fail to reveal, however, is that approximately 30 per cent of early stage breast cancer will return as metastatic breast cancer (MBC) and eventually kill. The Canadian Cancer Society says that only 22 per cent of those with MBC will live beyond five years — and the time that they do live is spent in treatment.

Right now, according to ReThink, Canada doesn’t even have a running tally of how many people are living with MBC. It’s an area of health care that lacks proper data and is severely under-funded and under-researched. By carefully choosing where your donation goes, you can help advance research for MBC, raise awareness of this deadly cancer and, hopefully, one day find a cure.

Navigating (and curing) cancer is difficult enough, but it becomes additionally taxing when patients and donors are trying to avoid the landmines of people and organizations who are putting their bottom line ahead of doing the right thing.

Cancer is an insidious disease. But with transparency, honesty and actively choosing to make things better for those who living with the disease, as well as those trying to help, we have far more to gain than just making money.

‘Against All Odds: Young Canadians & Cancer’ is a biweekly ongoing Global News series looking at the realities young adults face when they receive a cancer diagnosis.

2:59
With no national drug plan, some young people can’t access the cancer drugs they need