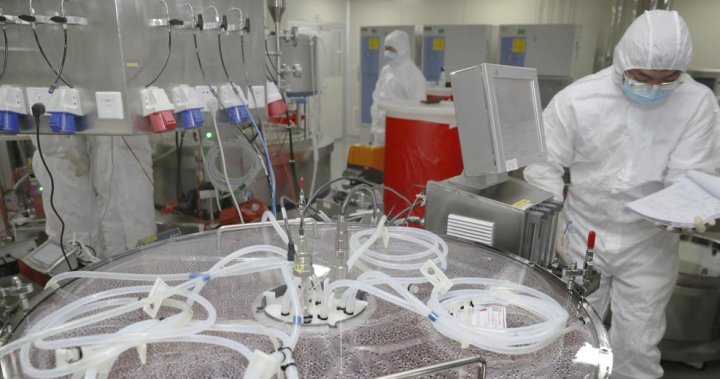 The Chinese city of Shanghai started administering an inhalable COVID-19 vaccine on Wednesday in what appears to be a world first.

The vaccine, a mist that is sucked in through the mouth, is being offered for free as a booster dose for previously vaccinated people, according to an announcement on an official city social media account.

Scientists hope that such “needle-free” vaccines will make vaccination more accessible in countries with fragile health systems because they are easier to administer. They also may persuade people who don’t like getting a shot in the arm to get inoculated.

China wants more people to get booster shots before it relaxes strict pandemic restrictions that are holding back the economy and are increasingly out of sync with the rest of the world. As of mid-October, 90 per cent of Chinese were fully vaccinated and 57 per cent had received a booster shot.

A video posted by an online Chinese state media outlet showed people at a community health centre sticking the short nozzle of a translucent white cup into their mouths. The accompanying text said that after slowly inhaling, people hold their breath for five seconds, with the entire procedure completed in 20 seconds.

“It was like drinking a cup of milk tea,” one Shanghai resident said in the video. “When I breathed it in, it tasted a bit sweet.”

The effectiveness of non-needle vaccines has not been fully explored. Chinese regulators approved the inhalable one in September, but only as a booster shot after studies showed it triggered an immune system response in people who had previously received two shots of a different Chinese vaccine.


A vaccine taken orally could fend off the virus before it reaches the rest of the respiratory system, though that would depend in part on the size of the droplets, one expert said.

Larger droplets would train defences in parts of the mouth and throat, while smaller ones would travel further into the body, said Dr. Vineeta Bal, an immunologist in India.

The inhalable vaccine was developed by Chinese biopharmaceutical company CanSino Biologics Inc. as an aerosol version of the company’s one-shot adenovirus vaccine, which uses a relatively harmless cold virus.

The traditional one-shot vaccine has been approved for use in more than 10 markets including China, Hungary, Pakistan, Malaysia, Argentina and Mexico. The inhaled version has received a go-ahead for clinical trials in Malaysia, a Malaysian media report said last month.

Regulators in India have approved a nasal vaccine, another needle-free approach, but it has yet to be rolled out. The vaccine, developed in the U.S. and licensed to Indian vaccine maker Bharat Biotech, is squirted in the nose.

About a dozen nasal vaccines are being tested globally, according to the World Health Organization.

China has relied on domestically developed vaccines, primarily two inactivated vaccines that have proven effective in preventing death and serious disease but less so than the Pfizer and Moderna vaccines at stopping the spread of the disease.

Chinese authorities also have not mandated vaccination — entering an office building or other public places requires a negative COVID-19 test, not proof of vaccination. And the country’s strict “zero-COVID” approach means that only a small proportion of the population has been infected and built immunity that way, compared to other places.

As a result, it’s unclear how widely COVID-19 would spread if restrictions were lifted. The ruling Communist Party has so far shown no sign of easing the “zero-COVID” policy, moving quickly to restrict travel and impose lockdowns when even just a few cases are discovered.

China’s COVID prevention measures to be more scientific, accurate: ‘The dawn is ahead’

Authorities on Wednesday ordered the lockdown of 900,000 people in Wuhan, the city where the virus was first detected in late 2019, for at least five days. In remote Qinghai province, the urban districts of Xining city have been locked down since last Friday.

In Beijing, Universal Studios said it would close its hotels and attractions “to comply with pandemic prevention and control.” The city of more than 21 million people reported 19 new cases in the latest 24-hour period.

I Have 2 Questions For You (Motivational Video) Fearless Motivation
The Walt Disney Company to mark 100th anniversary with new experiences
He Was Fatally Beaten by Memphis Police — Now People Around the World Are Sharing #SunsetsForTyre in His Honor
Podcast: What to know about “novelty hunting.”
How to Un-Stub Your Toe on the Nail of Life | Eric Bailey Motivational Speech | Goalcast