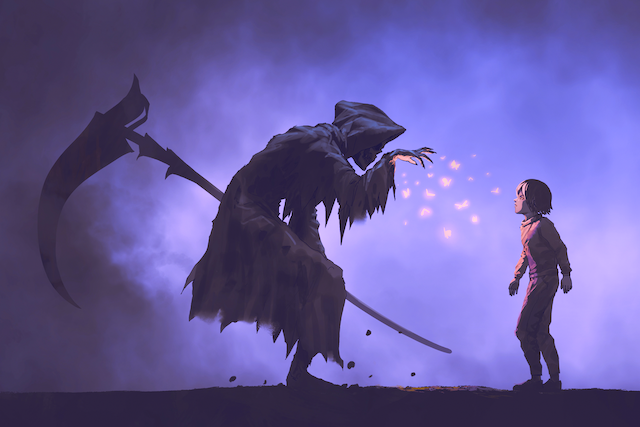 “Grief is really just love. It’s all the love you want to give, but cannot. All that unspent love gathers up in the corners of your eyes, the lump in your throat, and in that hollow part of your chest. Grief is just love with no place to go.” ~Jamie Anderson

I knew my son was watching me. We were inhaling fistfuls of popcorn while Frozen 2 played on the screen above. (Spoiler alert…)

Anna has just realized her sister, Elsa, is dead, frozen solid at the bottom of a river. Anna must carry on life without her.

My son turned his body and looked directly at me, ignoring the film. He knew what was coming. I began to weep. This is what he expected. He patted my arm with his little hand, which was buttery from popcorn and sticky from sour gummy worms.

Anna’s body slumps over, and her broken voice begins a haunting song of grief: You’ve gone to a place I cannot find. This grief has a gravity. It pulls me down.

I’m frozen, too, within memories of the death of my brother Dave by suicide just months earlier. Cartoon Anna and I together mourned our lost siblings.

My young son comforted me while I cried. As I think about it, it is such a twisted scene. Can’t we just go to the movies, eat a bunch of crappy food, have a couple of laughs, and call it a night?

None of us intended for me to have a grief spiral in an animated film with a talking snowman and a plot line featuring a guy who is enmeshed with his reindeer. But the film is all about grief.

It is about one daughter’s quest to heal intergenerational trauma and right the wrongs of the past. It is about another daughter trying to learn the stories of her lost parents, and in so doing, she enters a space that is unsafe and threatens her life, too.

I guess it is completely predictable that this story would remind me so much of my own family.

Six months before Dave killed himself, our dad had died of esophageal cancer. My son certainly saw my tears coming. He’s nine now. He knows that he has a mother who lives in grief. He knows that his mother has a wound where her brother and father once were and that the wound gets reopened from time to time. He’s seen me cry more than I ever imagined he would.

Have you ever thought about how many children’s films feature the death of a parent or sibling? Here are the ones that come to mind off the top of my head: The Lion King, Frozen, Big Hero 6, The Land Before Time, Finding Nemo, How to Train Your Dragon 2, Bambi, Abominable, Vivo, Batman, the entire Star Wars franchise. This year’s Lightyear. You get the picture.

Death is so pervasive in children’s films that a team of Canadian researchers looked at the prevalence of death in this genre and concluded that two-thirds of kids’ movies depicted the death of an important character while only half of films for adults did.

So, if my kids watched a movie a week, they’d see thirty-four deaths a year—usually the death of a parent or close family member. What is up with that?

It is an easy plot device. What better way to thrust a character into a scenario in which they heroically redeem a terrible tragedy by going on a journey, taking back the throne, restoring the family name, and so on? The point of the movie becomes the main character rising again in the face of loss. It is the quintessential hero’s journey.

I don’t have issues with kids being exposed to death. I’ve had lots of open conversations about it with my kids. When children’s films show children thriving after terrible events, there may be some psychological benefit to that, by helping kids know that there is indeed life after death.

But I am worried about how the pervasiveness of these stories is shaping our expectations about grief.

It’s an important conversation to have, especially when more than one million Americans have so far died from COVID. The impact on children has been immense. From April 1, 2020 to June 30, 2021, data in Pediatrics estimated more than 140,000 children under age 18 in the U.S. lost a parent, custodial grandparent, or grandparent caregiver.

Children see death over and over, but there is very little treatment of grief in popular culture. In most instances, a film shows the hero standing with head bowed beside an open grave. The audience may observe a tear or a nod toward a period of sadness, but the character is back in action within sixty seconds, fighting the dragon, building the robot, or saving the world.

The other alternative is that prolonged grief drives one to become a villain. If loss is not quickly translated into action, it seems to fester into vengeance and evil. I’m thinking of the Kingpin from Spiderman, Dr. Callaghan from Big Hero 6, Anakin Skywalker (a.k.a. Darth Vader) from Star Wars, Magneto from X-Men, among others.

These films are telling a story about grief that is a disservice to us all. Our society counts on a bereaved person bouncing back to action almost immediately. And if they don’t, in a prompt, timely manner, the suspicion is that the grief has ruined them.

These films help craft a society that has no model for the emotion of loss. For the slowness of it. For the darkness of it. Especially in the lives of children.

During the season of my loved ones’ deaths, my children were twelve, eight, and eight. They were tender and sweet. And young. But also, old enough.

There was a lot of talk about cancer at our house. The kids knew the science. They shared a house with my dad while he went through his first round of chemo. They knew it was miserable.

I believe in being honest with children in a way they can understand. I didn’t want them to be afraid that Grandpa would die. I wanted to let them in on the secret that Grandpa was going to die. No need to keep anyone in suspense.

I was with my dad when he died in California. My children were at home in Minnesota. A few minutes after he died, I called them on the phone. My husband, Rob, sat with them, and I told them one by one. I talked to them while Rob held them.

When my brother died, Rob and I both sat with the children. We told the youngest and the oldest together. They were once again tender and fearful. Surprised. Wide eyed. We held them.

They didn’t say much. Uncharacteristically, they didn’t ask any questions. They knew that Uncle Dave was mysteriously sick.

I can just imagine the torrent of questions: How much sadness is too much sadness? How much pain is too much pain? When the cat dies? When my best friend is mad at me? What makes your heart hurt so much that dying is the logical step? When does one reach that point?

Psychologically speaking, talking with my children about Dave’s death was so hard because it threatened to dismantle their basic assumptions about the goodness, safety, and predictability of the world.

In my conversation with my children, I didn’t want their sense of goodness, justice, and safety to be shattered. The world is no longer a predictable, good place when someone kind and loving experiences such darkness and ultimately a horrible, self-inflicted death.

Everything in me is organized against my children understanding this logic. I didn’t want it to enter their minds or their hearts.

But it has. It will. They will come to know the full story of their soft-spoken uncle with the beautiful blue eyes. They will remember him on our couch and in the park and in the kitchen and at the lake. They will know the truth about him and how he was lost.

And there is no way around the reality of suicide, the reality that the truth is beyond the careful, thoughtful, simple explanations of their mother. I can’t make it neat or easily digestible for them. It is too messy.

My children have been up close and personal with grief these past years. They’ve held human ashes in their hands. They anticipate that I will cry during a movie scene in which a character loses a sibling. They know all about cancer. They’ve attended memorials

It isn’t what I would have chosen for them—to be in a movie theater, comforting Mommy because the cartoon reminds her of her dead brother. That isn’t what I ever pictured when

I first held their tiny baby bodies in my arms and my heart swore to protect them with every cell in my body. Sometimes I apologize to them in whispers: “I’m sorry that our lives have unfolded like this.”

There is a way to use the deaths of children’s movies to facilitate conversations about grief and loss.

A 2021 study in Cognitive Development found that animated films may provide the opportunity for parent-child conversations about death, because parents often watch these films with their children. However, according to researchers, few parents take advantage of this opportunity to talk about death with their children. I encourage parents to take advantage of these teachable moments.

They are also seeing that the duration of grief is not five minutes of screen time but that it is years.

When they came into my world, I didn’t anticipate that grief would be such a prominent lesson in their childhood. But after watching Dave implode, alongside the loss of our dad, perhaps grief, real grief, is a more essential lesson that I anticipated.

Perhaps watching me slog through it will help my children navigate out of their own darkness one day. Disney is introducing them to death. It’s my job to show them the reality of grief.

Sherry Walling, PhD, is a clinical psychologist, speaker, yoga teacher, and entrepreneur. Her podcast, ZenFounder, has been called a “must listen” by Forbes and Entrepreneur magazines. Her book, Touching Two Worlds: A Guide for Finding Hope in the Landscape of Loss, was released in July. For more information, go to www.sherrywalling.com.

Waitress Soothes “Fussy and Teething” Baby So Mother Can Finish Her Meal
‘It was my heart’: Women with heart disease face barriers to care in Canada, report says
How I Stopped Worrying About Running Out of Time to Achieve My Goals
‘Gen Z yellow’: Next ‘it’ colour or marketing ploy?
It Takes One Person To Make You Feel Like You Matter | Kyle Scheele Inspirational Speech | Goalcast