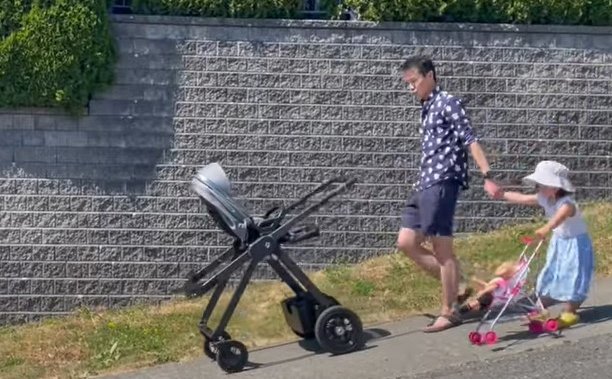 A Canadian-based startup is creating a lot of buzz at this year’s Consumer Electronics Show (CES) in Las Vegas, for their offering of a stroller that includes hands-free navigation.

But before you panic and think “wow, that sounds incredibly unsafe,” there’s one huge disclaimer – the self-driving function only works if a child isn’t in the stroller.

The Ella AI smart stroller is the brainchild of Anne Hunger and Kevin Huang, the founders of Vancouver baby gear startup GlüxKind, who were inspired to develop the device in 2020 as new parents, according to a press release.

Less than three years later, they’re getting set to ship out a fully formed product that comes equipped with a self-propelled motor and 360-degree sensors.

It’s meant to serve as “an extra pair of eyes and an extra set of hands” with its 360-degree “safety bubble” that constantly monitors its surroundings, and will automatically stop if it goes out of range or encounters an obstacle. It will also sound an alert if it detects potential obstructions like cars or bikes.

If the child is in the stroller, a dual-motor system (similar to an e-bike) can help take up some of the pushing burden for those walking uphill, and an automatic brake assist function can help slow and stop the stroller going downhill.

Tokyo is so overcrowded, Japan is paying families $10K per child to move

If the child is out of the stroller, safely in a guardian’s arms or walking along beside, it can be switched into hands-free mode “empower(ing) parents to be present and focus on their kids without compromise or distracting multitasking.”

A YouTube video showcasing the product shows more clearly how it works – a parent pushing a stroller downhill lets go of the pram to rescue a child’s dropped toy, and the stroller brakes on its own. In another demo, a restless child wants to be carried, so the Ella drives itself.

It also includes additional stroller-specific features, like an automatic rocking function and a built-in white noise machine. An accompanying app can track routes and distances and help locate a lost stroller.

All these design elements landed GlüxKind a CES 2023 Innovation Award, earning the highest score in the “Vehicle Tech and Advanced Mobility” category, and the stroller is currently on display at the Venetian Hotel in Las Vegas for this year’s show.

As with many new technologies, however, the Ella doesn’t come cheap. Right now, the stroller will set caregivers back by about $5,000. It is available for preorder in North America, with a crowdfunding campaign set to open up in spring. Deliveries are slated to begin in April.