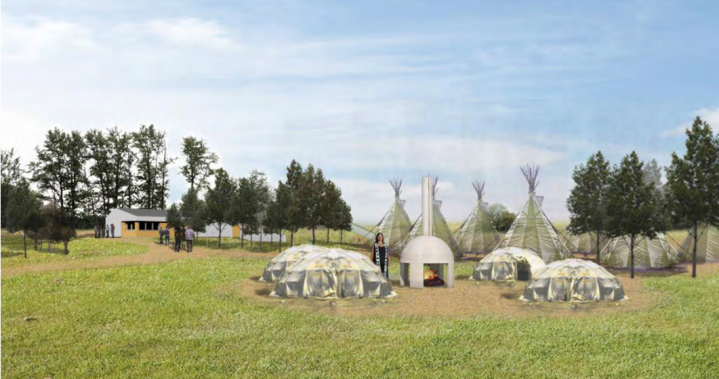 On an sunny and beautiful September day, the sound of construction filled the air in Edmonton’s river valley, where crews were hard at work building the first urban Indigenous ceremonial grounds in Canada.

“My heart is really full,” said Lewis Cardinal, the Indigenous Knowledge and Wisdom Centre (IKWC) project manager for kihciy askiy. He’s been working on making the facility a reality for the better part of two decades.

The City of Edmonton partnered with the IKWC, an Alberta-wide organization supporting First Nation education, on kihciy askiy.

Cardinal praised the city for its work in the project, calling it a bold act of reconciliation.

“To be here today, after all these years, is really to be stepping into a dream that I know is going to be beneficial for many Indigenous families and youth and elders, but also Edmontonians, because we also will have our door open for non-Indigenous people from Edmonton to be able to come in to learn.”

kihciy askiy is intended to be a solemn site for Indigenous ceremonial gathering, so lively events like powwows won’t happen there.

“We don’t want this to be a tourist attraction and the elders have made that very clear,” Cardinal said.

The facility will adhere to the city’s noise bylaw and have a capacity of 100 people at a time.

“This is a place to be solemn, to seek solace and to make that connection with the land and the creator. And so we want to ensure that we follow that.”

What’s behind the growing interest in Indigenous-led tourism in Canada?

The site will have a circular area for up to eight sweat lodges and two permanent stone heating devices with a water source. There will also be an area for tipis with a permanent fire pit for ceremonies and small group workshops, and an amphitheatre.

A pavilion building will house washrooms, locker rooms, a gathering room and storage for ceremonial items. The site will have 50 parking stalls and two stalls for big busses.

The kihciy askiy site was selected for its historical and cultural significance: Howard Mustus, chair of the kihciy askiy elder council, said it’s where Indigenous people would engage in commerce with traders and gather with kinsmen to socialize.

The city said the site was also used to forage for medicinal plants and ochre, a rare mineral that is also found close to the site and was used in spiritual and traditional ceremonies.

On a more logistical level, Cardinal said the site was also selected because it’s accessible for those who rely on transit.

“Most of our peoples in the city have transportation issues, so they can’t leave the city in order to do ceremonies,” he explained.

It’s been about 140 years since ceremonies like the ones kihciy askiy is designed for have been carried out in Edmonton’s river valley, Cardinal said.

“We’re the only group of people who have to leave the city in order to pray. We don’t have a mosque, a temple or a cathedral that we can pray in.

“But now this is our cathedral, our mosque and our temple. It’s a place where anyone can come to learn more about and being connected to Indigenous traditions.”

There are also over 60 organizations in Edmonton that serve the needs of the Indigenous community, Cardinal said.

“Each of them have cultural programming or ceremonial programming as a part of what they do. They need space. Everyone has to leave town up to 100 kilometres to go and do various ceremonies and events, but now they can have access to this space.”

‘We encourage people to do the research’: A look at developing land acknowledgments in Canada

Cardinal said the IKWC anticipates demand for the site will be great that there will always be a ceremony or something going on.

“I think the only challenge we’re going to have is ensuring that we have enough space to to support everyone’s needs.”

Mustus agreed scheduling could be an issue, as schools and government agencies have expressed interest in coming to the site to witness ceremonies and learn.

“This land then becomes important for them to come in and and be able to deliver that kind of programming,” Cardinal said.

Other cities have taken notice: Cardinal said he’s received calls from officials in Toronto, Saskatoon, Calgary and Winnipeg, all eager to create a similar space in their communities.

“Most Indigenous people are no longer living in their traditional communities, they’re in the urban centres. So they need to have access to culture,” he said, adding the space will help with the reconciliation process.

‘I downplayed it all’: Métis man shares journey to self-love after residential school

The project has been 16 years in the making, from initial consultations with dozens of elders to meeting and working with various City of Edmonton departments.

“I’m not really complaining about the time — some things are worth waiting for and worth building together,” Cardinal said.

Making ceremonies and educational opportunities accessible to both the Indigenous and wider community is important to reconciliation, Cardinal said, but it took several years for it to come together because it had never been done before.

The city worked with the IKWC, as well as Reimagine Architects and builder Delnor, to conduct engagement about the community’s needs and come up with the facility taking shape in west Edmonton.

“We really had to start with a blank slate in terms of trying to understand the programming needs, how it was expected to be operated,” said Jason Meliefste, a branch manager with the city who has been involved in the $6.5-million facility for a few years.

“This project pales in scale and funding to a lot of the other major infrastructure projects at the city, but I don’t think you’d find another project that has the same level of impact that this will have on our community.”

Edmonton is home to the second-largest urban Indigenous population in Canada.

The city is full of churches, mosques, gurdwaras and other paces of worship, but Meliefste said there’s about 65,000 Indigenous people in Edmonton that don’t have a place to practise their traditional ways.

“I’m looking forward to that community having a home to be able to do this, to continue their practices and teach and pass down those learnings to their next generations.”

Frederick Campion is a spiritual leader who is on the kihciy askiy elder council. He is also an IKWC liaison and Treaty 8 representative. He said his grandfather was demonized by the church for conducting sweat lodges in the 1930s.

“My grandfather prepared me for this, and I’m very happy to be seeing this happen in the city of Edmonton,” Campion said.

He believes traditional ceremonies are key to keeping Mother Nature happy and the land healthy.

“Responsible for this land — that’s what we are as Indigenous people. We’re responsible and once they keep hearing that drum, the spirit will come and look after us. This is our belief. Whether you believe it or not, this is our belief,” Campion said.

“We want to share these teachings so that everybody can have a greater understanding about this relationship.”

Cardinal said part of the facility being accessible for the wider public includes developing programming specifically for the surrounding neighbourhoods of Grandview and Brookside, in the spirit of being good neighbours.

Construction started in late 2021 and will continue through to next spring. Once finished, the site will be open daily from 9 a.m. to 4:30 p.m.

The IKWC will operate the site under a licence agreement with the city: the IKWC will focus on programming while the city services the site and buildings.

Gary Vaynerchuk’s Life Advice Will Change Your Future | Gary Vaynerchuk Motivation (Gary Vee)
How To Find True Happiness | David Meltzer Inspirational Speech | Goalcast
61-Year-Old Accidentally Leaves Her Wallet at a Walmart Parking Lot – One Teen Drives Miles Just to Return It to Her
A More Colorful Approach to Meditation—Creating Your Way to Peace
If You’re Feeling Judged: One Thing You Need to Understand