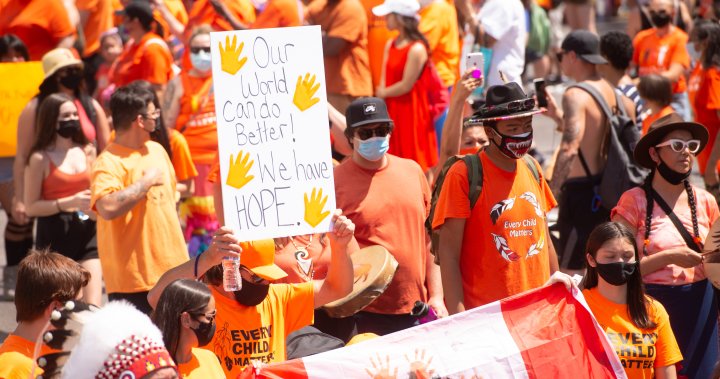 The statutory holiday asks the country to reflect on Canada’s bleak history of mistreatment of Indigenous Peoples and the lasting intergenerational trauma of residential schools.

The bill to create the statutory holiday as a response to one of the Truth and Reconciliation Commission’s 94 Calls to Action received Royal Assent on June 3. The holiday will see federally-regulated workplaces such as businesses that fall under the public sector, banks and post offices closed.

The 24 hours coincide with Orange Shirt Day, described by the federal government as “an Indigenous-led grassroots commemorative day” that encourages the wearing of an orange shirt in honour of Indian residential school survivors and the thousands of Indigenous children who never came home.

Many provinces across the country are observing the day. Here’s how you can participate.

Read more:
Here’s how you can mark the National Day for Truth and Reconciliation in Ottawa

Although the National Day for Truth and Reconciliation will not be recognized as a statutory holiday in Ontario, several major cities are still choosing to partake.

Trent University in Peterborough, Ont., will be installing a new Treaty Rock outside Bata Library at 10:30 a.m ET. The school’s First Peoples House of Learning will host a sacred fire at 12:30 p.m. behind the Emwayaang building that will feature guest speakers, lunch and an open mic.

In Ottawa, the National Cemetery of Canada will host a two-hour tour at 8 a.m. ET designed to show the “educational and contemporary truths” of First Nations, Inuit and Metis peoples’ relationships with Canada.

The Remember Me walk will begin at 10 a.m. ET on Parliament Hill to commemorate the lives of Indigenous children who suffered at residential schools, and whose bodies have been found in thousands of unmarked graves across the country this past year.

And in Toronto, a Unity Jam concert will be held in Dufferin Grove Park at 3 p.m. ET that will include Indigenous performances and Juno-award-winning musicians.

4:13
Reflecting and learning on Truth and Reconciliation Day

Reflecting and learning on Truth and Reconciliation Day

In Saskatchewan, the Saskatoon Tribal Council is presenting a concert at SaskTel Centre featuring cultural performances and musical performances from Gord Bamford, Charlie Major and George Canyon to honour the National Day for Truth and Reconciliation.

The University of Saskatchewan’s campus and buildings will also be lit orange this week while projections of the TRC calls to action will be shown on the school’s Peter MacKinnon building and main university library.

A gathering and march organized by the Native Women’s Shelter of Montreal and Assembly of First Nations Quebec-Labrador is being held at 1 p.m. at Place Du Canada in Montreal, as part of the Every Child Matters movement to commemorate the thousands of children who died at the hands of residential schools.

“Speakers, a ceremony, and drums will precede the march to Place-des-Arts, where speeches and artist performances will be held,” a release for the event said.

Read more:
Truth and Reconciliation Week events you can attend in Saskatchewan

An Evening of Prayers led by the diocese of Montreal will start at 7:30 p.m. local time at 1085 rue de la Cathédrale. Members of the Kahnawake and Mohawk communities are expected to present artwork and participate in the installation of a statue of Saint Kateri Tekakwitha made by Archbishop Christian Lépine.

All schools and federally regulated workplaces will be closed in Manitoba to mark the statutory holiday, and Indigenous-led events have been ongoing throughout the month.

A Healing Walk will begin at 11 a.m. outside of the Canadian Museum for Human Rights in Winnipeg. According to the event, the walk will end at St. John’s Park, where a Welcome Home Pow-wow is being led by Wa-Say Healing Centre. The powwow will begin at 1 p.m. A pipe ceremony and lighting of Sacred Fire will start at noon.

Meanwhile, provincial officials in Alberta are encouraging all residents to “reflect on the legacy of residential schools,” but say they are leaving the implementation of a statutory holiday up to individual employers.

1:49
New Brunswick cities and towns observing truth and reconciliation day on their own

New Brunswick cities and towns observing truth and reconciliation day on their own – Sep 8, 2021

The annual event, which will take place at noon, is organized by residential school survivor Eddy Charlie and is expected to feature live music, food, “a First Nations blessing and welcome, followed by a flag raising and a moment of silence.”

An intergenerational march will also take place outside of the University of British Columbia’s Indian Residential School History and Dialogue Centre at 11:45 a.m.

While the province of New Brunswick has said it will not be commemorating Truth and Reconciliation Day, many major cities have opted in.

The Town of Sussex, Moncton, Miramichi and have all said they will participate, and will lower their flags to half-mast.

“The painful legacy of residential schools has been felt throughout our country,” Mayor Dawn Arnold said in a statement earlier this month. “I encourage our employees and residents to take the time on September 30 to reflect, listen and learn from Indigenous leaders, elders and artists and to honour those impacted by the tragic history of our Indigenous communities.”

Read more:
National Day for Truth and Reconciliation will not be provincial holiday in Ontario

Most city offices and facilities in Newfoundland and Labrador will be closed for the statutory holiday, provincial officials said Friday.

In Nova Scotia, officials said an opening prayer and song ceremony will begin at 10 a.m. They added that a flag-raising ceremony will begin at 5:30 p.m. at the Grand Parade, along with Indigenous performances and words from a residential school survivor. The province will also support Weekend of Reconciliation on the Waterfront events, hosted by the Mi’kmaw Native Friendship Centre.

In a statement released earlier this month, Prince Edward Island Premier Dennis King invited Mi’kmaq leaders, members of the Indigenous community and the public to attend two minutes of reflection that will be at the provincial administration building on the national holiday, “followed by the lowering of the flags to honour the lives of Indigenous peoples impacted by residential schools.”

“Later that evening, the government offices in Charlottetown will be lit up in orange to recognize the first National Day of Truth and Reconciliation,” the statement read.

The Indian Residential Schools Crisis Line (1-866-925-4419) is available 24 hours a day for anyone experiencing pain or distress as a result of their residential school experience.

Employees Leaving Due to a Toxic Culture? Time to Renovate. (i4cp login required)
Mom Learns Her Son Has Been Bullying Classmate – What She Does Next Shocks the Internet
Tony Robbins Life Advice Will Leave You Speechless (MUST WATCH)
Meeting Your Match: 5 Foolproof Ways to Create the Best Tinder Bio
Beyond the birds and bees: How new services and tech are helping us make babies in unexpected ways