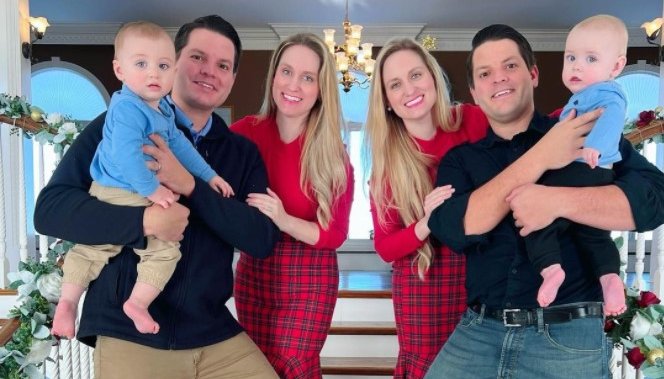 If twin brothers marry twin sisters and both couples have babies, what does that make their offspring? Cousins? Siblings? Both?

It’s a bit of a brain tickler, for sure, and one that’s playing out in the United States.

6 misconceptions about having twins

Identical twins Briana and Brittany, 35, met identical twins Josh and Jeremy Salyers, 37, at the 2017 Twins Days Festival in Twinsburg, Ohio. The girls fell for the boys, were proposed to side-by-side, and returned to the Twin Days Festival the following year to be married in a joint wedding.

Fast-forward a few years, and the sisters each had a baby — albeit three months apart. (Not everything can be totally in sync!)

Quaternary twins are defined as the offspring born less than nine months apart to two sets of identical siblings. They don’t share a womb, or even a parent, but the DNA they inherit from their twin parents makes them not only cousins, but genetic brothers.

The couples, who share a joint Instagram page, posted the interesting scientific fact alongside a photo of their babies. There’s no denying that Jax and Jett share a resemblance.

Now both families share a home, a business and, judging by their Instagram account, a wardrobe. Everyone dresses identically to their identical sibling all the time.

“We get asked if we’re twins every day of our lives; we do everything together,” Jeremy told the Smith Mountain Eagle last year. “It’s rare for us not to do even the smallest thing together, like going to the grocery store. We’ve done it that way our whole lives. The girls are the same way. So it was only natural for us to move in together after we were married.”

Briana told USA Today that both families “hope to be lucky enough to experience overlapping pregnancies together again.”

She also told Today that their situation is an exceedingly rare one: “There’s only 300 quaternary marriages known in the history of the world.”