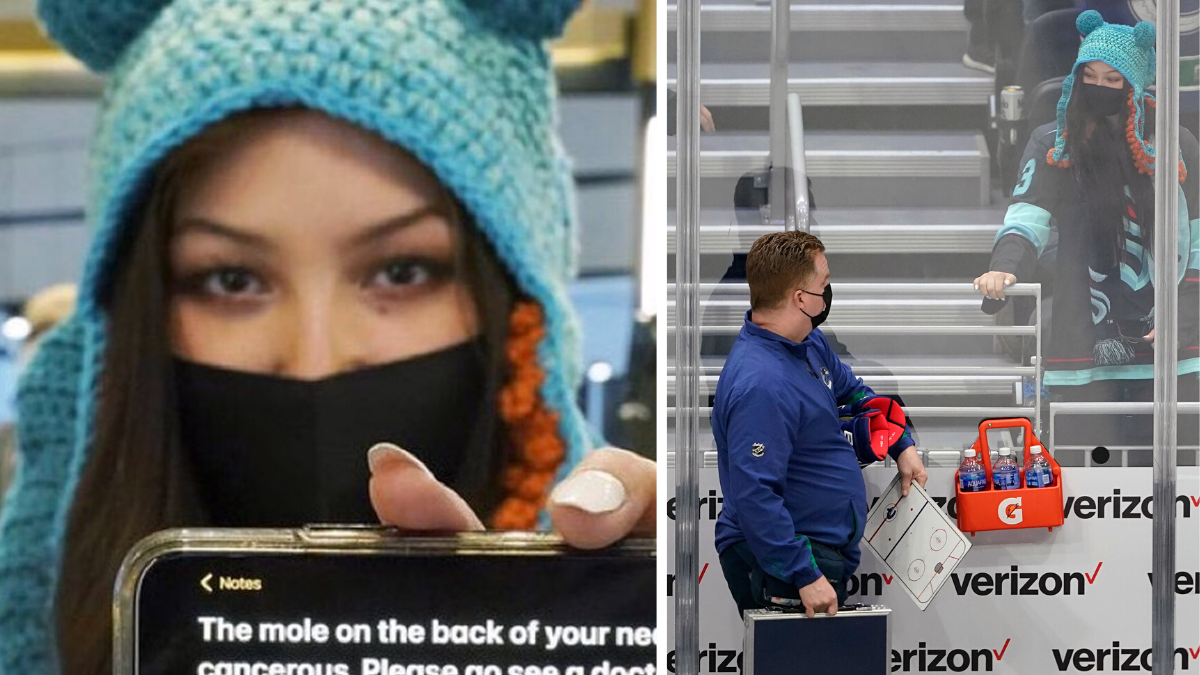 While Kraken fan Nadia Popovici was watching the Vancouver Canucks and the Seattle Kraken hockey game on October 23 at the Climate Pledge Arena, her eyes kept shifting from the game to the back of Brian Hamilton’s neck.

Brian ‘Red’ Hamilton, an assistant equipment manager for the Vancouver Canucks, had a two-centimeter mole just above the collar of his jacket. It was raised, irregularly shaped, and discoloured- all possible characteristics of a cancerous mole which the soon-to-be medical student had learned to spot while volunteering in oncology wards.

Immediately, the 22-year-old typed a message on her phone. After waving several times, she finally got Hamilton’s attention and placed her phone against the plexiglass.

“The mole on the back of your neck is possibly cancerous. Please go see a doctor!” the message read, with the words “mole,” “cancer,” and “doctor” in bright red.

“After that moment I kind of regretted it,” Popovici told Sky News of her typed-out phone warning. “I thought, ‘you know, that was inappropriate it, I shouldn’t have brought it up, maybe he already knows about it and it’s a sensitive topic.’”

After the game, at home, Hamilton asked his partner if she could spot the mole, and she confirmed its unusual appearance. He asked the team doctor if it was worrisome, and he agreed it was.

A biopsy confirmed that Popovici was right: Hamilton had type-2 malignant melanoma, a type of skin cancer that, because it was detected early, could be easily removed and treated.

She took me out of a slow fire. And the words out of the doctor’s mouth were if I ignored that for four to five years, I wouldn’t be here.

Brian Hamilton at a press conference

Hamilton asked the Canucks franchise to help him find the woman he described as “a hero” and posted a letter he wrote to the team’s Twitter account.

I am trying to find a very special person and I need the hockey community’s help. To this woman I am trying to find, you changed my life, and now I want to find you to say THANK YOU SO VERY MUCH! Problem is, I don’t know who you are or where you are from.

Less than three hours later, Popovici’s mother saw the letter, and repeatedly tried contacting her daughter who had been sleeping at her home in Tacoma, Washington, after working overnight as a crisis intervention specialist at a suicide prevention hotline.

Popovici, who had already planned to attend the game on Saturday between the Canucks and Kraken in Seattle, was invited by both teams to meet the man whose life she saved.

At the game, both teams presented Popovici with a combined $10,000 scholarship to use for medical school expenses. And Hamilton told her what he told reporters- that his mom wants her to know that she loves her.

In an interview with The Hockey Writers, Popovici said that, while she’s incredibly grateful for the scholarship, the most impactful moment was when she got to meet Hamilton’s partner and daughter over FaceTime.

I got to hear what an incredible father and man Red is and hear how this scary but relieving news felt to his closest family.

Nadia Popovici to The Hockey Writers

“His family and mine are now all connected and planning future dinners and meetups once COVID protocols lift. It’s baffling how in one day, Red went from a stranger to family to me,” she said.

#HockeyTwitter, we need your help!

Please RT to spread the word and help us connect Red with the woman he considers his hero. pic.twitter.com/HlZybgOnjf

While everyone is calling her confident and courageous for speaking up, Popovici told Canuck Clay on his YouTube channel that she was scared and wanted to be sensitive and almost talked herself out of bringing it up. The lesson, she says: Trust yourself, trust your instinct. “Think of how you would want someone to treat you,” she says. “Your intentions matter.”

Don’t be afraid to speak up

“Courage is resistance to fear, mastery of fear, not absence of fear.” – Mark Twain

Billionaire Ray Dalio’s Life Advice Will Change Your Future | Motivational Speech
What Most People Get Wrong About Singles and 6 Messages You Might Need
Fireman Delivers Baby in a Burger King Parking Lot — Receives a Shocking Call the Next Day
Racist Hampton Inn Employee Calls Police on Black Guest and Kids – But This Hotel Fires Her Instead
The Science That Will Change Your Future | What is Consciousness?