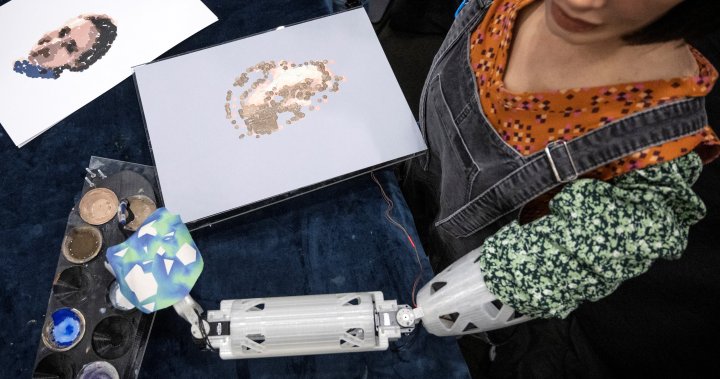 When an artificial-intelligence (AI) generated picture won first place in the Colorado State Fair’s fine arts competition in September, debates quickly emerged over whether AI-generated works should be considered art.

The winner, Jason Allen, said he indicated the work was made by AI when he submitted it to the competition under the category of digital arts/digitally manipulated photography.

Could robots take your job? How automation is changing the future of work

The painting in question was created with Midjourney, a text-to-image generator that converts a text prompt into digital art. After the user puts in the text prompt, the algorithm generates the assets based on a database of pre-existing images and artwork.

Users usually would type in a few keywords to describe what they want the image to look like. Based on them, the AI creates digital drawings. The images could be further customized by feeding in other detailed commands, according to Midjourney’s user manual.

Midjourney is not the only text-to-image generator. There are other programs such as DALL·E, Nightcafe and Starryai that produce similar results. But the controversy over it is thrusting the technology to the front of a growing debate about what it means to create art and most importantly— what is art?

Canadian artists who spoke to Global News said AI still has a long way to go before it might be able to really replace artists and designers, and said while AI-generated images are impressive, they lack “the human touch.”

“What we do (as concept artists) is actually a lot more complex than just drawing and oftentimes you don’t see it from an outside point of view because people only see the final polished version of the product,” said Hamza.

“On a daily basis we have to communicate with different departments and find a way to harmonize every section’s needs into one design, so I don’t think the AI is at that point where it can do this for companies.”


Hamza said artists and designers took many years to learn how to organize images to convey a very specific mood or message.

“All of these things take years of practice, it takes at least seven years to learn how to draw, and then you have the painting skills and design skills to add on top of that, and those are another three or four years,” said Hamza. “Learning how to make art from scratch takes at least 12 years and at that point, you haven’t mastered it.”

Hamza said she was previously tasked to look into text-to-image generators to see if they can adapt AI for concept art development for video game designs, but “wasn’t specifically impressed” even though the results are beautiful.

“It has a lot of potential for creativity and brainstorming,” she said. “What I think is more worrisome is that the AI isn’t quite as intelligent as we’d like to believe it is, so I think it just mashes up a lot of bits and pieces of pre-existing images.”

Ljubica Todorovic, an artist who also runs a framing business, said there has been fear among some artists that AI is going to take away the work from living artists.

However, Todorovic said she is not worried.

Todorovic added that the controversy surrounding AI-generated art is very similar to how artist reacted to cameras when they were first introduced.

“Camera Obscura is one of the first controversial things that was out in the 1600s,” said Todorovic, adding that digital devices like drawing tablets were also in the heat of the debate when they came out in 1990s.

Meet Ai-Da, the first robot that can paint like an artist

Todorovic said there are also concerns over the ethics of creating and profiting from AI-generated art.

She said for the sake of ethics and to be professional, artists who generate images using AI — which build on and adapt pre-existing images made by other artists — need to attribute to the original source and be transparent that their drawing is generated by AI.

Hamza said there are also copyright issues that don’t allow AI to replace real artists in a professional setting.

“This is where the big part of the dilemma in my industry is that we can’t really claim these images until we know what the sources are,” said Hamza.

In Canada, creators cannot obtain copyright over a work that is entirely AI-generated since it is not a human-authored work, said Carys Craig, a professor at the Osgoode Hall Law School at York University.

“This means an author must exercise skills and judgment when expressing their ideas.”


Craig said the AI’s ability to process data and produce digital art is not the kind of authorial skill and judgment that fits the definition of work deserving copyright protection.

Copyright law only protects human-authored works so that authors and artists are encouraged to create cultural products, and to be rewarded by the copyright system, said Craig.

She said although she thinks AI-generated drawings are “wonderful to look at”, the rationale for protecting AI-generated works with copyright law “just isn’t there.”

“To my mind, art is something more than the machine-generated image. It’s an exercise of human creativity and human expression,” she said. “I think it’s very important to recall that what the machine is doing is very different from what human artists and operators are doing.”

‘We are not prepared’: Russia uses artificial intelligence, deep fakes in propaganda warfare

For Shana Patry, AI-generated images can come in useful for her creation as reference images — images that artists sometimes use to get an understanding of what objects should look like in real life.

Patry, who is a full-time artist in Saguenay, QC, told Global News that she believes AI-generated images can be “a massive time saver” for artists and useful for brainstorming ideas and exploring different compositions.

“Artificial Intelligence can create reference images extremely quickly for painters and artists,” said Patry. “These images will have a consistent light source, color harmonies and an awareness of things like reflections and bounced light.”

Patry has used AI-generated images for one of her traditional oil painting works, in which she said the paint, canvas and the texture are something an AI couldn’t mimic.

She said she believes that there will be always room for artists as the “artwork exists first in the mind of the artist as a concept or an idea before being put onto the canvas.”

“AI helps define that vision into something clearer and tangible,” said Patry. “The artist’s mind is still required to create AI images. Generators can’t do anything without being told what to do, so it’s all about the idea and the artist behind it.”

I Have 2 Questions For You (Motivational Video) Fearless Motivation
This Year, Let Go Of The People Who Aren’t Ready To Love You
It Takes One Person To Make You Feel Like You Matter | Kyle Scheele Inspirational Speech | Goalcast
Beyond Dry January: 5 Benefits of Extending Your Break from Alcohol
14-Month-Old Girl Sees Clearly For The First Time in New Glasses (VIDEO)