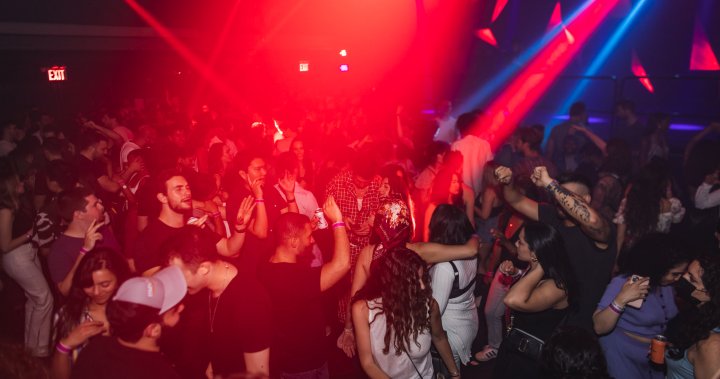 A crowd of partygoers begins to sway their hips to the melodic beats of Arabic music as Philippe Manasseh, the DJ and one of the co-founders of Laylit, helps kick-start a night dedicated to the celebration of diverse music from the Middle Eastern and North African regions and their diaspora.

Laylit — a platform and collective, which translates to “the night of” in Arabic — has turned into a night of not just carefree joy, but also of reconnection to a community that felt forgotten.

“(One of the venues) we do the party at was very shocked at the number of tickets we sell in advance. It’s because these people have been forgotten all these years, and now they’re here and they’re ready to go out,” said Manasseh.

Laylit was founded in the fall of 2018 by Saphe Shamoun, Nadim Maghzal and Manasseh, three DJs originally from Aleppo and Beirut, now based in New York City and Montreal.

The party event was launched after Manasseh and his partners felt disconnected from their Arab roots, especially in terms of culture and music. These parties aren’t just for people from the Middle East or North Africa, either — they’re for people of all backgrounds, ethnicities and cultures who enjoy and appreciate the music, opening the door to a greater understanding and a deeper human connection.

“There was very little representation for anything from the region in North America and Montreal. The only representation we get is usually found in world music festivals and is very traditional,” said Manasseh.

He said it’s important for Canadians to better understand Arabs, especially when their knowledge of the culture is “very tainted by the U.S. since 9/11, the Trump era and the Muslim bans.”

He said people leave Laylit parties thinking about how fun and culturally rich the event was, and “this idea stays in their head alongside the word ‘Arab.’”

“Little by little, they start creating these associations that are positive. And if we really want to be a multicultural society, we need to interact with each other. These parties are not isolated incidents from the rest of Canada. It’s designed to be part of the Canadian experience,” said Manasseh.

The rise of Arabic music

Thousands of partygoers attend Laylit, especially in New York, but Manasseh said people in Montreal are now “more hungry and excited” for the event following the isolation caused by COVID-19, and it’s an event that hasn’t taken place very often in Canada.

“Canada equally has as much demand, it’s just there’s no supply,” said Manasseh.

But the Arabic party scene is growing, and more events are popping up across the country — like Ya Tab Tab night, for example, described as an early 2000s Arabic pop night. It features some of the most popular songs that many Arabs grew up dancing to, mimicking in front of family members and friends. The music of that era can be described as a little sassy and “extra.”

The event was first launched in May 2022 in Halifax, with another event planned in Toronto for Oct. 15.

Co-founders of Ya Tab Tab, Rami Nassif, a house and techno DJ, and Akram Hamdan, a photographer, were inspired to create this event out of their fascination with Middle Eastern pop culture.

“The Middle Eastern pop culture scene is entertaining for what it is. It’s very extra. There’s a lot involved, with the references and the humour and the music and all of it,” said Nassif. “Neither of us felt we were super-connected with the Middle Eastern communities here, and we wondered if we were to host a Middle Eastern pop night, will people come? Will they show up?”

About 300 people showed up at their last event in June, and after growing demand from the Arab communities in Toronto, Nassif and Hamdan decided to bring it to the city.

Many factors have contributed to the growing appeal and popularity of Arabic dance party events and music nowadays, explained Nassif, with music manager Wassim (Sal) Slaiby leading the way.

In the spring of 2021, under the banner of Universal Music Group and Republic Records, Slaiby, who is Lebanese-Canadian, launched Universal Arabic Music.

In praise of — and a plea for — better sounding music

In a recent Los Angeles Times article, writer Amos Barshad states that “Slaiby has helped usher The Weeknd to superstardom and now manages a bevy of streaming stars including Doja Cat and Swedish House Mafia,” and he now believes Slaiby can get songs in Arabic on the North American music charts through his roster of singers like Palestinian pop singer Elyanna and rapper $kinny, originally from Saudi Arabia.

Lebanese singer Nancy Ajram also made history in late July as her new hit single Sah Sah became the first Arabic song to debut on the American Billboard Dance Charts. Coming in at No. 38, the popular creative entered the Dance/Electronic Songs Chart with American DJ Marshmello.

“We also see artists from the Middle East or North Africa like French Montana, who’s Moroccan, now starting to incorporate the music from his upbringing into what he pushes out now,” said Nassif. “No one says French Montana is an Arabic artist, he’s certainly a hip-hop/R&B rapper, but he still samples from North African famous musicians like Cheb Khaled.”

Heading towards a new, inclusive future

When Nassif moved from Lebanon to Halifax at 18 years old, he realized there wasn’t a big scene for house and techno music in Halifax, and as a DJ he wanted to change that.

“There’s no occurrence of house and techno in the city, so it dissuaded me from DJing in Halifax, and I would only play a few times when I’m back in Lebanon for the summer, so I got isolated from the scene,” said Nassif.

He found that house music was never associated with anything Arabic, but he kept pushing it by putting some of his mixes — featuring techno and house music with an Arabic influence — out on Soundcloud during the pandemic.

Analyzing 10 categories on the music fan spectrum. Where do you fit in?

His Soundcloud mixes were his way of telling stories about the diaspora experience and finding nostalgia through house music. In one, titled Ana Shway Emotional, Nassif says he worked to combine his obsession with Levantine history, love of house music and immigrant blues. It tells the story of a Lebanese family’s path of exile and immigration that has led them to live in complete denial of the past.

“(The mixes) created a good buzz in the city and a few promoters in Halifax reached out. One of them wanted me to make people feel like they’re not in Halifax for three to four hours,” said Nassif.

He said, unfortunately, many Arabs and non-Arabs frame Arabic or Middle Eastern music as pop.

“They see it as this one thing and not across multitudes of genres and sounds and subgenres,” said Nassif.

Even though Ya Tab Tab features mostly Arabic pop, which is nostalgic for many Arabs and is mostly what’s in demand right now, Nassif hopes that by slowly bringing in new mixes, Arabs will be more open to new sounds.

“Whether you want to call it Arabic house or Eastern electronic music … it’s still within a genre. We don’t need to recreate anything that’s there. We’re not creating a whole other world, but we’re bringing in new sounds within the genre that already exist,” said Nassif.

At Laylit, Manasseh says he and the other DJs aim to start the night with pop music and then end it with more experimental, new sounds.

“We’re trying to challenge the notion that Arabic music belongs in the ‘world music category.’… We don’t like the music being lumped in like this, I hate this label … whereas other types of music like reggaeton now have their own label,” said Manasseh.

Alan Cross explains how our music is shaped by technology, Part 1

He said in the future, he hopes Arabic music gets its own label, like SWANA (Southwest Asian and North African) music.

This term is used to describe the region commonly referred to as the Middle East. SWANA is a “way to distinguish the region in geographical terms, rather than ‘political terms’ as defined by the western world.”

SWANA Alliance, a U.S.-based national organization, states that some of the political terms that have been used in the western world to refer to the region are “Arab world” or “Islamic world” which have colonial, Eurocentric and orientalist origins.

“Arabic music and the dance scene is trendy right now, which I’m in disbelief of,” said Manasseh, who alluded to the fact that years ago, being Arab and indulging in the culture wasn’t considered “cool” at all.

He said the future of the Arab dancefloor is one that is modern and open-minded, not just musically and culturally, but socially as well.

“It’s very important for us to be a place where the Arab community can come, but for non-Arabs to come too, because we want to create this positive friction on the dancefloor,” said Manasseh. “For people to feel they are expressing their culture in front and others, to be seen by new eyes.”

He also said that he wants Laylit to be a safe and welcoming place for both queer and non-queer people.

“Arabs are not used to partying with LGBTQ people in general. It’s not part of the culture back home,” said Manasseh.

He said drag queens have become a staple at their parties and a lot of people were thrown off by it at first, but now they love it and are seeking it.

“To have everyone in the same room, queer or not, immigrant or not, or if they’ve always been here … it’s a hodgepodge,” said Manasseh.

Laylit said its next event will take place in Montreal on Aug. 28, while Ya Tab Tab will host its third event on Oct. 15.

Laylit is also getting ready to celebrate its four-year anniversary in September and is in the process of expanding to new cities like Toronto and Ottawa. The founders are also gearing up for their first EP release as a collective.

“We have a very flourishing music scene. There’s a lot of hip-hop, electronic music, pop music and funk still being made…. It’s not this monolithic thing. And everyone who comes to our events has no idea this existed,” said Manasseh.

Looking for love? 44% U.S. adults use dating apps to find long-term partners: study
How a social media group dubbed Mom Jeans is helping people fight inflation
8-Year-Old Boy’s Family Is Down to Their Last $12 Living in a Shed – Until His Own Business Saves Them All
The World’s Best Blind Mountain Biker | Brian Bushway | #shorts
Stranger Body Shames 17-Year-Old Girl in Public – But She Refuses to Stay Silent About It