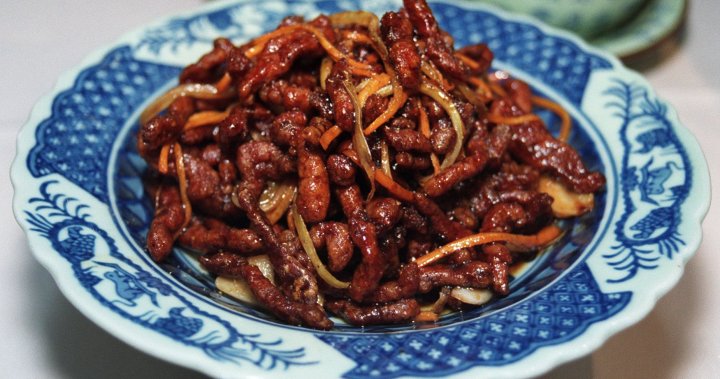 For many Calgarians, ginger beef is a signature dish of their beloved city. In fact, it’s adored across Alberta.

The dish is a plate of battered and fried beef strips often stir-fried with ginger, peppers and onions. It is then finished with a sticky, spicy sauce and served over a bed of plain or fried rice.

It has become a staple in Chinese restaurants and food courts across Canada. Look at any Chinese food stall in a Canadian mall and you’ll probably see ginger beef in a serving tray.

‘One of many wrongs to be righted’: Calgary moves closer to renaming James Short Park

But the humble dish also represents a collective struggle to survive on foreign soil.

It was first opened in 1975 by two sisters from Hong Kong, Louise Tang and Lily Wong, who revamped an old café just outside of Calgary’s Chinatown.

According to its website, Silver Inn’s original menu had some western and Beijing-style Chinese dishes to cater to mostly non-Chinese diners who weren’t used to authentic dishes.

After 47 years in the business, the restaurant finally closed its doors on Sunday. The business was so iconic that it had its sign stolen the day after (it has since been returned to the owner).

“Like any dish, it was made by mistake,” owner Kwong Cheung said.

“My oldest brother was a trained chef, and when we first decided to open the restaurant, he noticed that Canadians liked to eat French fries. Of course, being Alberta, people liked to eat beef.”

“We were trying to find a way to mix the two together… We figured out that we could get the beef and get it as crunchy as a French fry, then pair it with a sweet and sour sauce kind of like ketchup.

“We wanted to adapt to the local palate.”


Cheung said his family never noticed how popular ginger beef became until years later because they were struggling to make the business successful.

“When we first opened the restaurant in 1975, we were the first to serve (Beijing-style) food. We were thinking about how to survive the first six months. We never thought about leaving a legacy or anything like that,” the restaurant owner said.

“By the time anything took off, we were so busy we never thought about anything else other than keeping customers happy… We should have — we could have retired even sooner!”

The rise and fall of Chinatown: The hidden history of displacement you were never told

But these dishes often have a painful history. In the 1850s, many Chinese workers faced language barriers when they arrived in Canada, forcing them to either work on the Canadian Pacific Railway for poverty wages or open businesses.

These Chinese restaurant owners often had to modify dishes or entire menus to fit the majority-Western palate and create a successful business.

“In the 1800s, they were often the only Chinese people in these towns. Their customers are usually of European descent and ate at these restaurants because they came to Canada without their families,” said Josephine Smart, a retired anthropology professor at the University of Calgary.

“If you look up old menus, you will notice that Chinese-run cafes sometimes didn’t include a single Chinese item, and if they did it would be a very limited selection.”

These restaurants also served as community hubs for Chinese immigrants who often came to North America without their families due to racist immigration policies at the time.

“They would also be catering to Chinese immigrants who work in the same location, but they would be ordering from very different menus. Sometimes that’s just an oral menu: what does the owner have available today,” Smart said.

Smart said legacy restaurants like Silver Inn and Golden Inn are woven into Canadian culture because they’ve been around for so long.

Golden Inn was a restaurant known for its salt and pepper squid, located in Calgary’s Chinatown. The restaurant closed its doors in August after 45 years in the business.

“Overall, when you look at the history of Canada, Chinese immigrants play an important role. They are best known for working on the Canadian Pacific Railway and being domestic labourers for rich farmers and ranchers… The Chinese have economically and historically contributed innovatively.”

Smart did not agree with the idea that the closure of legacy Chinese restaurants means the downfall of Chinatown. Rather, it’s an opportunity to introduce new Chinese cultural elements to cities like Calgary and Vancouver.

“A lot of these restaurant owners don’t want their children to work in very demanding industries. They worked really hard to get the income and upward mobility others couldn’t. The children often have Canadian education and higher degrees than their parents,” Smart said.

“Cultural heritage can’t be locked in place. You can’t freeze it because it’s a living thing. You cannot safeguard some preconceived notion of cultures being frozen in time.

“The demands of the market are also changing… Their passing should not be considered a tragedy, but part of the natural economic cycle in the service industry.”

Calgary, Edmonton among 6 Canadian Chinatowns to call for post-pandemic supports

Chinese Canadian cuisine is also evolving. Many chefs are pushing the boundaries of traditional dishes, paving the way for “New Asian” cuisine and restaurants. New Asian cuisine is an umbrella term for dishes that integrate traditional flavours with modern cooking techniques and plating.

Nick Liu, the executive chef and owner of Dai Lo in Toronto, believes that New Asian cuisine creates more opportunities for Asian chefs to express their heritage and creativity. Dai Lo, which means big brother in Cantonese, is a Chinese restaurant that follows French cooking techniques.

Liu was inspired by his Hakka Chinese heritage and wanted to find a way to combine his French training with the food he ate growing up.

While he acknowledged Cantonese-style dishes like ginger beef are influential in Chinese Canadian cuisine, Liu said he was never comfortable cooking those dishes.

“The inspiration was always putting my family and my culture in the forefront. I was French-trained and I wanted to try to find a way to take the food that I was brought up with and find a symbiotic relationship with the places that I worked at,” Liu told 770 CHQR.

Liu also said New Asian cuisine empowered him to learn more about his culture and heritage. Like many first-generation Asian immigrants, his ethnicity was often an internal and societal struggle.

“There were times when I hated being Chinese. I actually shunned being Chinese. It’s the racism by my own people, but also the experience when you’re trying to fit in with the white and Canadian kids… You become a product of your environment,” the executive chef said.

“It took me a very long time to become Asian again. I really have to thank (my culture’s) food and (being able to) learn how to cook Asian food. This was how I learned about my culture again and became proud to be Asian.

Four Priorities for Total Rewards Leaders in 2023 (i4cp login required)
Watch the Breathtaking Moment a Family Finds Their Missing Son Lost at Sea as Part of Viral Rescue Mission
Beyond Dry January: 5 Benefits of Extending Your Break from Alcohol
Deliveryman Arrives to Pick Up an Order From a Bakery – Breaks Down When He Finds Out Why His Own Name Is on the Package
This Is How You Become the Best Version of Yourself in One Step | James Lawrence | Goalcast