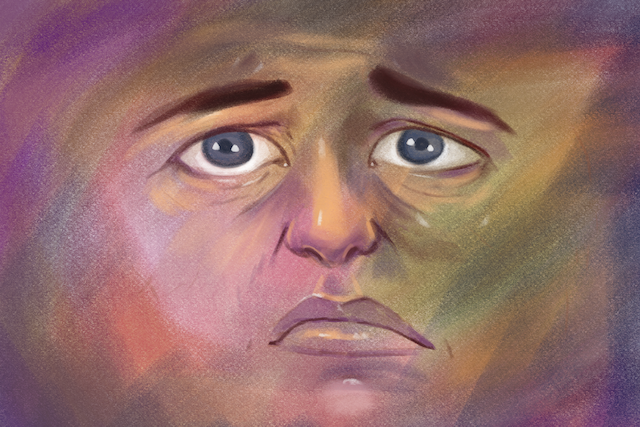 I jump to ridiculous conclusions when I’m emotional, and I’m like anyone else in that sometimes they get the best of me. And it’s pretty damn embarrassing in those moments, especially if I’ve been stupid enough to make any kind of decision.

Having the awareness to recognize your judgment is clouded by emotion is next to impossible at times. Many of us don’t know how to read the signals. Hence why we get swept away by our caveman instincts and find ourselves saying, “All I see is red when I’m angry.”

This is a serious problem as an adult.

Our kids mirror what they watch at home, school, and in society. They parrot what they see and assume that’s the appropriate response. Dad burned down a Wendy’s because they were out of mayonnaise, so of course, it makes sense to punch Samantha in the face because she drew a happy face on your binder at school.

You, me, and every other human walking this earth are flawed creatures. I don’t mean this in a demeaning you should be ashamed, get your sh*t together, holier than thou, I know better lecture.

I’m speaking from the stance of being a master at putting myself in stupid situations where it would take friggin’ Houdini-level skills to escape the mess I’ve created.

And why do I do this? Because my emotions run wild when I’m not looking after myself.

Humans make horrible decisions when solely guided by emotions (that vanish as quickly as they come). It’s like having horse blinders on. Our focus only becomes what is directly in front of us and is filtered through the emotion we happen to be feeling. We’re blind to all the other inputs that could help us better manage the situation.

It’s the same reason why 99 percent of people lose money investing in individual stocks. They buy and sell based on their emotions rather than on the company’s value (the only thing that matters).

As investment author William Green said, “Most people make their investment decisions (and life decisions) on the basis of an unreliable hodgepodge of half-baked logic, biases, hunches, emotion, and vague fantasies or fears about the future.”

Ken Shubin Stein is a guy who knows a thing or two about high-pressure decision-making. He spent two decades running a hedge fund in New York. He’s also a professor at Columbia University Graduate School of Business, where he has taught Advanced Investment Research since 2009. Oh, and he also decided to become a neurologist just for kicks because he loves geeking out on how the mind works.

You’re probably wondering, how could a guy who runs a hedge fund help you live a better life?

Because the success of his career is judged on one basic idea—don’t make stupid decisions. And I don’t know about you, but wouldn’t life be a lot easier if you felt confident about your decision-making (regardless of how chaotic your life feels)?

Can you guess what they are?

Honestly, try and see how many you can think of before you read on. Think about the last time you made a poor decision. What emotions were flowing through you?

I’ll give you a clue. Shubin Stein uses the acronym HALT-PS as a reminder to pause when those emotions might be impairing his judgment. He takes it one step further and postpones important decisions until he’s in a state where these emotions don’t flood his brain.

Here are the nasty culprits of crappy decision-making.

Think of HALT-PS like a gigantic red stop sign. The moment you notice any of these emotions are present, hit the brakes. You wouldn’t just rip through a stop sign going at full speed because you’re in a rush, so why would you make a rash decision that has a damn good chance of causing you to crash into oncoming traffic?

HALT-PS creates a buffer between the emotion and the decision. This time delay can be a lifesaver since full-blown emotions are short-lived. Creating a little space means you get a chance to slow down, open your mind, and from a calm state, you can consider the risks that you might have otherwise overlooked.

Why is HALT-PS such a damn powerful technique to have in your toolbox? Because it helps you answer the question: Why might I be wrong?

This framework doesn’t only help with the life-changing decisions we make when we’re emotionally overwhelmed. It can also help us catch ourselves before we plant a seed of a belief without noticing the trajectory it puts us on.

I’m a first-time dad with a five-week-old daughter. Tiredness and stress come with the role. In her second week alive, I was already telling myself that I wasn’t strong enough to be a dad. The sad part was that I believed it under the fog of exhaustion. Was I going to be nothing but a disappointment to her?

There was a time in my life where I would have let that be my story moving forward. But now, I reflect because there are plenty of reasons why I might be wrong.

Here I am five weeks in, and I regret selling myself short because I didn’t give myself the chance to prove myself. I’m doing the best I can at something I’ve never done before. Isn’t that the single best lesson we can ever hope to teach a kid? Do your best. Don’t regret what you’re trying your best on.

Without the awareness of HALT-PS, I wouldn’t have recognized that my thinking was impaired under a cloud of sleep deprivation and stress.

Not every argument needs to be a fight. And not every fight needs to lead to a blowup. We can deescalate situations with ease when we have an awareness of our emotions at the moment.

I love using HALT-PS for this very reason. Ignoring our emotions is the mental equivalent of drunk driving. It’s stupid. You don’t have the cognitive ability to make a safe decision.

In the heat of the moment, our emotional disposition and moods routinely distort what we see and how we relate to what’s going on. I’m not that angry is like saying I’ve only had a few beers. It doesn’t take much to wrap you around a pole.

Keep it simple. Sometimes the best decision is to make no decision at all.

Most of us are not making life-and-death decisions that need an immediate response. Give yourself space to step back from the situation so you can clearly view your emotions through the lens of HALT-PS.

Is an emotion present? Be vulnerable.

I’ve gotten in the habit of telling my wife the truth, and it’s a rather novel idea that works pretty damn well. When I’m charged up, I tell her I’m not in the emotional headspace you deserve for this conversation. When I have the capacity, I promise we will talk about this because I know it’s important to you.

Be forewarned. Using HALT-PS is like wielding magic powers. It doesn’t make the emotions go away, but you will become a master at surfing the waves that so many people get crushed by.

Chris Wilson is a bipolar creative with a knack for personal development. He geeks out on productivity, minimalism, and enjoying life. He runs Simplify Your Why, where he shares lessons learned on overcoming his battles with depression, type II bipolar, and entrepreneurship. He created a free course for anyone who wants to lead a happier, more productive life of simplicity (with less stress). Click here to access it.