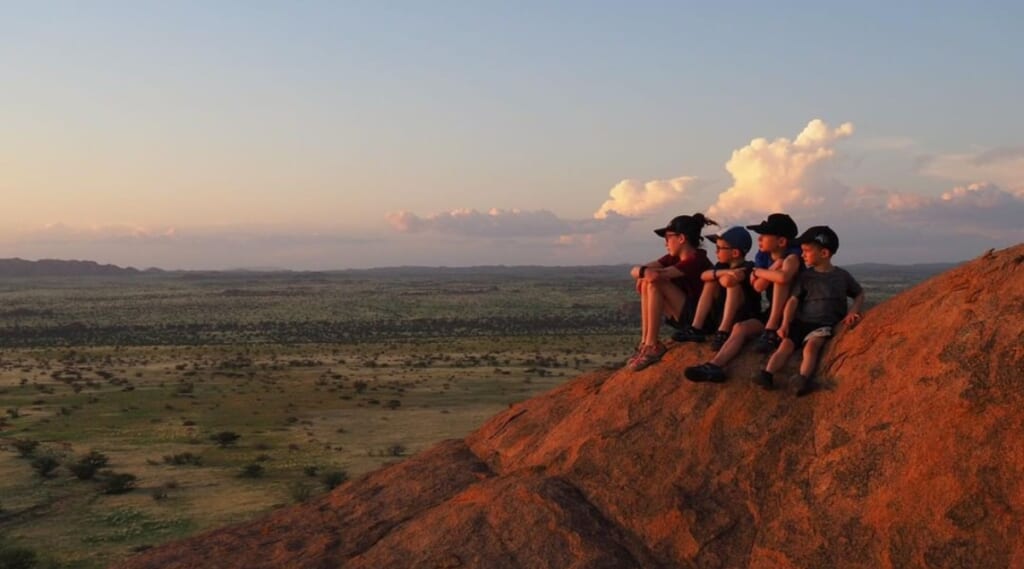 When three of there children were diagnosed with a rare genetic condition that causes a loss of eyesight over time, Edith Lemay and Sebastien Pelletier opted to take their children on a journey around the world in order to give them a lifetime of “visual memories.”

The Quebec family of six has been forced to deal with a series of rarities. Their firstborn, Mia, was diagnosed with retinitis pigmentosa at just three years old, a very rare condition that would cause her a steep decline in her eyesight throughout the rest of her life.

As if the odds of Mia’s RP weren’t small enough, parents Lemay and Pelletier also started noticing the vision of their two sons, seven-year-old Colin and five-year-old Laurent was also in decline.

In 2019, Colin and Laurent joined Mia in being diagnosed with retinis pigmentosa. The family’s oldest son, nine-year-old Leo, is the only kid in the nucleus family who hasn’t been diagnosed with the rare genetic vision disease.

How One Family Tackled a Rare Disease That Causes Potential Blindness

There is currently no cure for RP but that didn’t mean the entire Lemay-Pelletier family was prepared to pack it in. In fact, they did quite the opposite.

The family was told by an eyesight specialist that immersing the children with “visual memories” could help the kids increase their chances of retaining their vision. As a result, Edith and Sebastien decided they’d give their children the best visual memories of all: the entire planet.

The Lemay-Pelletier family started social media channels in order to document their entire journey and planned to travel the world with their kids before they potentially lost their eyesight for good.

In March 2022, the family left Montreal and began their global excursion in Namibia, getting up close to safari animals before heading to Zambia, Tanzania, Turkey, Mongolia, and Indonesia. The family says they plan to travel around the world over the course of an entire year in a “quest to fill their visual memories.”

On their Instagram page — which serves almost as a diary for the trip — the Lemay-Pelletier family says they created a “bucket list” of experiences they all wanted to accomplish on the worldwide trek. Mia said she wanted to go horseback riding and Laurent wanted to drink juice while staring at a camel.

Sebastien says before the trip, the parents would slowly build up their savings. The father says he received a “welcome boost” when the healthcare logistics company he works for was bought out, so he sold his shares. He says it was “a little gift from life” and used the money to fund the trip.

The family says they left Canada without an itinerary and get inspiration for where to go next on the fly. Edith and Sebastien admit they only plan about “a month ahead.”

RELATED: Shaquille O’Neal’s Father Made a Dying Wish – and Leaves His Family With a Priceless Gift

Besides witnessing some of the Earth’s most beautiful sights, the parents hope their beautiful journey will help the children develop strong social and coping skills.

Aside from witnessing beautiful sights while their vision is still relatively strong, the couple hopes that the trip will help the children develop strong coping skills. Mr. Pelletier says his kids will need to be resilient throughout their lives, regardless of what happens to their vision.

Pelletier says the trip is about showing his children “something different” and providing them all with “unforgettable experiences.” The father says, “there are beautiful places everywhere in the world, so it doesn’t really matter where we go.”

How the Global Journey has Inspired Others With Vision Problems

Edith says people around the world have been reaching out to the family to offer words of encouragement. The mother says a teacher back home in Quebec who’s a specialist for blind children gives her class details of the Lemay-Pelletier’s trip.

Lemay says the teacher describes pictures or reads whatever the family posts on social media.

The parents say they’re hopeful that Mia, Colin, and Laurent may never go blind but that they’ll continue to do whatever they can in case the unpredictable disease does take their eyesight. Pelletier says he’s hopeful that science will find a solution down the line but for now, they’re just living in the moment.

In a moment as scary and tragic as this one, this family has been tackling life head-on fearlessly. Victory is a mindset! You can overcome anything.

How I Stopped Feeling Embarrassed and Ashamed of Being Single
8-Year-Old Boy’s Family Is Down to Their Last $12 Living in a Shed – Until His Own Business Saves Them All
Gary Vaynerchuk’s Life Advice Will Change Your Future | Gary Vaynerchuk Motivation (Gary Vee)
If You’re Feeling Judged: One Thing You Need to Understand
The Most Heartfelt Speech About Being Your Best | Gian Paul Gonzalez | Goalcast