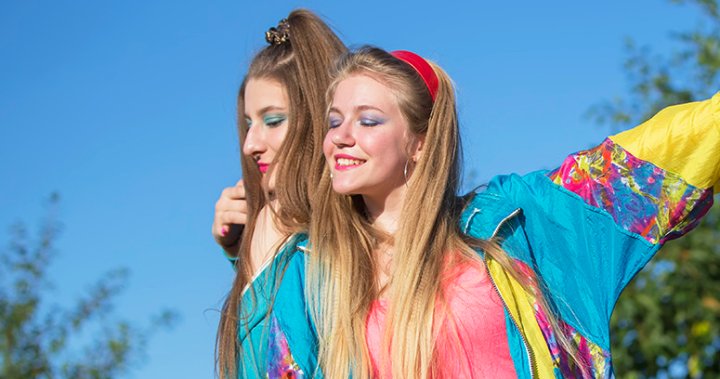 Dig up your Dep gel and Manic Panic, because we’re taking a walk down memory lane.

Beauty products from the ‘90s were full of experimental trends and flashy gimmicks to help fashionistas stand out in the crowd. If you’re longing for the style and flare of the ’90s, there’s no better way to get lost in nostalgia than by swooning over these beauty products from memories past.

Think you can find any of these beauty products still hiding in your Caboodles case?

Let’s kick things off with the shampoo that had a commercial so risqué you likely turned the volume down on the television if your parents were around. The original Herbal Essences shampoo had a simplistic packaging design and boasted a range of scents so intoxicating they’d make you, well — you’ve likely seen the commercial.

The brand has grown quite a bit since the ‘90s. It has maintained its followers by expanding its product offering, but also staying true to the original scents that made them famous.

Fall 2022 nails: These are the best press-on nails to buy right now

For teens who fought with their parents to get highlights, finding an inexpensive alternative often came down to Sun-In.

This bottle of lemon-scented goodness promised sun-kissed tresses that would mimic those of a California beauty who lived  at the beach. In reality, Sun-In created blotchy hints of highlights, which became increasingly painful for brunettes who were clearly not the target market for the product.

Sun-In is still kicking around for purchase, but many have caught on to the low maintenance balayage style instead.

Is there anything more synonymous with ‘90s beauty than Bonne Bell Lip Smackers? These brightly coloured chapsticks tasted as good as they smelled, and collecting them became somewhat of a sport.

Whether you were showing off your collection at recess or trading flavours with your pals during class, Lip Smackers were the glue that held our middle school relationships together. As the brand gained momentum, many coveted collections were released, including the Cosmic Smackers line, which introduced us to what is arguably the most superior flavour of them all: Strawberry Kiwi Comet.

Convincing your parents to buy you perfume probably wasn’t an easy feat as a teen, but if you worked hard enough to convince them, you were likely gifted with a bottle of Love’s Baby Soft. This adorable fragrance is one of those ‘90s beauty products you can still buy, and it’s the perfect match for those who wish to smell like a walking cloud of baby powder — if you’re into that sort of thing.

There was something so sophisticated about wearing Tommy Girl perfume. It was strong enough to knock the wind out of anyone nearby, reminding everyone that you were no longer a pre-teen.

Since Tommy Hilfiger was at the height of its fame in the ‘90s, anyone who was anyone had their hands on this fragrance. Maybe you carried it around in your backpack, or perhaps you had it neatly displayed on your vanity. Either way, it was probably a prized possession.

What is ‘marinated makeup’? Embrace the return of the 2000s goth girl aesthetic

It may have felt like you were piling on a bunch of gooey cement, but that didn’t stop Stila Lip Glaze from rising to the top of the ‘90s makeup food chain.

Stila changed the game when they came on the scene by showing beauty lovers what a professional line of products could look like in their makeup case. The Lip Glaze collection promised high shine and featured muted colours in a daytime finish. The only downside was trying to hide the loud clicking noise it made any time you applied it to your pout.

Another beauty product you probably used in the ‘90s was Hard Candy nail polish. From the outrageous metallic shades to the rubber ring wrapped around the lid, Hard Candy knew how to draw the kiddos in with their trendy packaging.

Hard Candy may have had their moment on the shelves of Sephora stores, but these days you’ll be lucky to find an item on a dusty Walmart shelf.

The best beauty brands NOT sold at Sephora

You wouldn’t think that deodorant played an essential role in our ‘90s beauty collection, but Teen Spirit was something special.

We’re not sure if it was the formula, bright packaging or the fun smells like Cute & Girlie or Cool & Mellow that made us proud to own it — but we were. It could also be the fact that screaming the lyrics to Nirvana’s Smells Like Teen Spirit feels more powerful when you’re wearing a product of the same name.

Lip Rageous lip balm was easy to misplace and inexpensive enough to buy in bulk. You may remember them as the thumb-sized balms that sat in plastic fish bowl containers at every corner store or dollar store. It made them super easy to track down, and these beauties played a close second to Lip Smackers in terms of tasting as good as they smelled.

But what truly set Lip Rageous lip balms apart was that time they graced us with a set of lip balms donning each member of NSYNC’s face across it.

For those who longed for a more adult approach to perfume or cologne, CK One was, well, the one. It was popular during an era when Calvin Klein rivalled Tommy Hilfiger.

The point of difference with CK One was its unisex appeal, making it one of the first fragrances to be marketed as gender-neutral. It was truly ahead of its time, and it’s still a fan fave today.

How to get ’90’s grunge fashion right

When you wanted to hold your perfectly crimped ‘do in place, it was Dep hair gel to the rescue. It came in fun colours and had some hip packaging — what’s not to love?

And let’s be real, it scored extra cool points when the brand partnered with Mattel for the release of Totally Hair Barbie. Both Barbie and Ken came prepared with a travel size edition of Dep styling gel and a full head of hair to get creative with.

If you didn’t have a Caboodles makeup case to dump all of your ‘90s cosmetics goodies in, we have to ask: were you even living? Sure, Caboodles had their own makeup line, and it was all kinds of fun, but the real joy was in the different coloured makeup cases.

Thankfully, modern versions of these nostalgic organizers are still available to shop for in some stores and online.

It may have been a kids shampoo, but when the scents are good enough to eat, you might as well join them!

L’Oreal Kids shampoo promised a “no tears” effect and quirky packaging that made bath time seem like a more desirable situation. Even though many have stated that the “no tears” claim was a complete sham, it’s the scent that kept bringing us back in.

For the days you couldn’t quite describe how you were feeling, you let the perfume do the talking instead. Bottled Emotions came in the perfect pocket size so you could feel your emotions, but hide them at the same time. Collecting each one was a real thrill, too. Even though the scent didn’t last very long, sometimes you just felt better knowing you could change the way you were feeling with a quick spritz.

It smelled like a household cleaner and forced you to dip your dirty fingers in and out of the jar, but boy did we love our Noxzema Cleansing Cream. Despite its intense scent, Noxzema made its mark with the promise of drawing in the attention of a boy like Jared Leto if you used it to clean your skin. At least, that’s what Rebecca Gayheart was trying to sell us when she was the face of the brand while standing next to Jared Leto in the commercial back in the ‘90s.

How to slug your skin

Rave Hair Spray hit the beauty scene in the ‘80s, but its popularity continued well into the ‘90s. There wasn’t anything particularly special about Rave, but in the days when teasing your hair was still a thing and holding your latest style in place was imperative, Rave really did the trick. And like Aqua Net before it, Rave has gone down in history as one of the most memorable hair sprays of our time.

You can still buy it today, but the packaging isn’t as cool as it used to be.

It’s hard to say if Maybelline Wet Shine Nail Polish was more a thing of the 2000s or the 1990s — but since it’s discontinued now, so we feel safe saying it’s from way back in the day.

The line of nail polish was introduced as a way of skipping the salon and made a promise to provide a “wet look” upon application for a full seven days. The colour options felt endless and the formula was superior, so having at least one in your possession was an absolute must.

Known as the world’s first disappearing colour sunblock, Coppertone Kids Colorblock was all the rage right around 1998.

The seemingly ordinary sunscreen came in two striking colours and allowed us to cover ourselves in purple or blue works of art before it disappeared into our delicate skin. It was a true stroke of genius from the Coppertone team to create something so clever in the name of protecting a generation from the sun’s harsh rays.

Once you were ready to graduate from your wide selection of Lip Smackers, there was a big chance you upgraded to Bonne Bell’s Liplix.

Think of Liplix as Lip Smackers’ older sister. The packaging had a more sophisticated appeal, the scents upgraded from bubble gum to coffee and the application was an entirely new world. What made Liplix stick out was its ability to provide a slight tint of colour to the lips, making it the perfect transition to lipstick when your parents were ready to approve it.

Before we had styling wands and Dyson hair dryers, we had Conair’s Hot Sticks hair rollers.

The flexible rollers came in two different sizes and promised bouncy spirals and tight tendrils. It made them the perfect tool for middle school photos. And even though the hairstyling world has since evolved, different variations of the product are still available today. But we think we’ll stick with our trusty flatiron.

This article was originally published on Slice.ca.