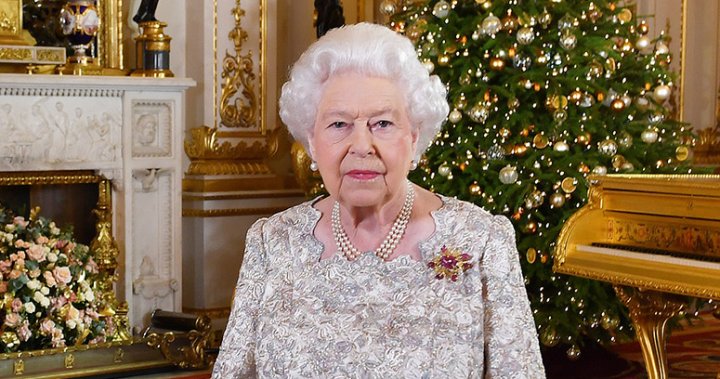 As it turns out, the House of Windsor had more than their share of quirky and downright unusual Christmas traditions that will leave you scratching your head. From gut-busting gag gifts and garlic bans to proper teacup etiquette and a rather shocking before-and-after dinner weigh-in (yes, really!), we’ve uncovered some of the most bizarre “holiday commandments” the royal family followed under the reign of Queen Elizabeth II.

A week before Christmas, Queen Elizabeth would host an annual luncheon at Buckingham Palace for her entire extended family — an exclusive guest list that typically totals more than 50 people.

Although she delivered fancy invites well in advance, woe betide anyone who declined the generous offer to spend the afternoon balancing their tea cups while mingling with a slew of faces only seen once a year. Little else is known about the top-secret event (no photography was allowed), leaving royal watchers and the British tabloids speculating about what actually went on behind those gilded gates.

See also: All the dog breeds the royals are obsessed with, beyond corgis.

Thou shalt… spend Christmas at Sandringham

If you thought prepping a Christmas turkey for your holiday feast was stressful, how do you think the royal cooks feel? Christmas week at Sandringham House, on the grounds of what is now King Charles’ Norfolk estate, is an absolute must-attend — although the rare exception is sometimes granted.

Once upon a time, close family wouldn’t be allowed to spend Christmas away from Sandringham. Just ask Diana, Princess of Wales, who never got to spend the big day with her Spencer clan. In recent years, however, the queen allowed for some wiggle room, letting Prince William and Duchess Kate visit the Middleton family in 2014.

See also: 10 bizarre rules royal children have to to follow.

Set aside any preconceived notions you might have as to the types of presents the Royal Family buy one another during the holidays. As it turns out, it’s all about a good gag. On Christmas Eve, the Windsors lay out their gifts on a table and exchange them over piping hot cups of tea.

That’s right — as a way to cut loose and avoid flaunting their wealth, the Royal Family buys each other gag gifts instead of expensive items. A few years back, Kate famously bought the then-single Harry a “Grow Your Own Girlfriend” kit while the prince allegedly bought his beloved granny a shower cap with “Ain’t Life a B*tch” printed across the top.

Oh, to have been a fly on the wall when the queen opened that gift.

Related: The most beautiful royal wedding gowns and what they cost.

Thou shalt… walk to church on Christmas morning

It’s something of an annual tradition for the Norfolk locals to line the streets leading to St. Mary Magdalene church on the Sandringham estate to catch a glimpse of the Royal Family as they walk to attend the Christmas morning service.

The Windsor clan — minus the little kiddos — walks the entire way, greeting royal watchers along the path, with the exception of the queen, who would arrive promptly at the church door via car.

The 2017 service, in particular, was a biggie for royal fans since it was the first time the not-yet-a-duchess Meghan curtsied to the queen in public. Naturally, it was dissected by news outlets for days afterward. A few things the former actor needed to remember: curtsies should never graze the floor; you simply put one leg behind the other, allow for a gentle bend at the knees and bow your head slightly. (Markle nailed it, for the record.)

You may also like: 6 ways Princess Diana and Meghan Markle are more alike than you think.

This shouldn’t really come as a surprise, but it still needs to be said: there’s no lounging around in PJs — not even on Christmas morning. (Our sympathies go out to the little ones — George, Charlotte and Louis.) The entire family is expected to be dressed and ready for all the Christmas Day festivities, from the morning church service to the formal evening dinner. Modesty first, while still being fashionable.

See also: From heels to hats: 10 fashion rules the royals must follow.

Thou shalt… be weighed before and after dinner

This is not a joke, friends. According to royal expert and Majesty editor-in-chief, Ingrid Stewart, every Royal Family member is weighed before and after their Christmas dinner. (We’ll give you a moment to let that sink in.) It’s apparently a tradition that dates back to the early 1900s during the reign of King Edward VII who, as a way of determining whether or not his guests had been sufficiently fed, asked them all to step on the scale.

Given the fact that the Windsors enjoy three huge meals throughout Christmas Day, the scale seems more than a little excessive. Some traditions just don’t age well.

You may also like: Royal family’s net worth: how rich are they?

The queen was highly fluent in French and preferred for it to be used during all formal dinner occasions. That meant, the Christmas dinner menu was supposedly printed in French, as well. No word on whether Kate or Meghan were familiar with the language when they spent their first Christmas with the royals.

Thou shalt not… eat garlic

We’ve all got those foods or seasonings we simply can’t stand, be it due to taste or texture. Queen Elizabeth, however, had one intense dislike that also happened to be a common cooking ingredient: garlic. As former royal chef John Higgins told the National Post in 2016, “they’re missing out on garlic because, at Buckingham Palace, you don’t cook with garlic. I suppose, in case you get the ‘royal burp.’” The real reason, according to reports? The queen hated the smell.

Related: Every time Harry and Meghan were real about their mental health.

Thou shalt… cease to eat once Her Majesty is done

One of the great things about being a queen is that, when it comes to meals, you set the pace. During meals, when Queen Elizabeth had taken her last bite, she reportedly would quietly put down her fork and everyone else would have to follow her lead, whether or not they were actually done with their food. We imagine this must have been a struggle for the majority of her guests.

Thou shalt… fold thy napkins in half

When at the table, napkins must be folded in half at all times to avoid unsightly stains and food bits. Royals are expected to gently wipe their mouths and hands inside the fold of their napkins. To do otherwise would risk dirty clothes — gasp! — and gross napkins coloured in a variety of less-than-appetizing food stains. Out of sight, out of mind.

Thou shalt not… play Monopoly

During the holiday break, the royals would enjoy rousing games of charades. Queen Elizabeth loved it so much that no one else would be allowed to retire from the room until she was done playing. But there’s one game, in particular, that was strictly prohibited — Monopoly.

Yes, that board game where you collect real estate and “get out of jail free” cards. The reason? In the past, it’s gotten too competitive and heated so the queen had it banished. What we want to know is who the guilty party was.

Thou shalt… use utensils properly

The majority of us commoners don’t typically spend time dwelling on how we cut into our food during a meal, but the royals take their dining etiquette very, very seriously. Regardless of whether you’re right-handed or left-handed, knives must be held with your right and forks with your left (with the tines facing down, of course). It doesn’t end there: once you’ve cut off a piece of food, it must be balanced on the back of the fork, instead of poked through with the tines.

Entrances are an important factor in the Windsor family hierarchy, and the Orders of Precedence pecking order is nailed down to an exact science. The procession, naturally, used to begin with the queen and would continue in order of those next in line to the throne. For example, prior to his death in April 2021, Prince Philip never entered a room alongside his wife — he always trailed behind her by a few paces during all public and formal events.

Now, King Charles will be the head of the pack.

Yes, there’s a correct way to hold a teacup and saucer — and, yes, that means you’ve probably been doing it wrong. As etiquette expert Myka Meier told People, a royal is expected to use their thumb and index finger to hold the top of the handle, with the middle finger gently supporting the bottom of the cup. Keep those pinkies tucked in! In addition, the women have an extra rule to abide by — one must sip from the exact same spot to avoid lipstick stains around the rim.

Thou shalt not… take down Christmas decor until February

Although most of Queen Elizabeth’s guests would start to leave Sandringham House after Boxing Day, the queen reportedly continued with the festive feels until the second week of February. Although this might seem odd to some, there’s actually a really poignant reason behind the queen’s desire to keep the tree and tinsel up for an extra month and a half.

Her father, King George VI, passed away on Feb. 6, 1952, and it was her way of remembering him during the holiday season before she would head back to London for the year.