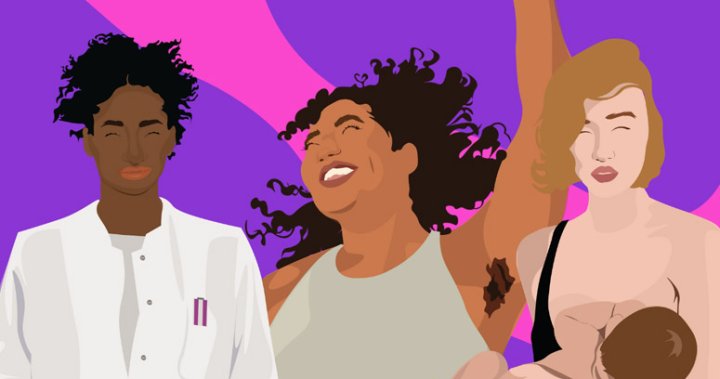 Gender equality has come a long way since the suffragettes fought for the right to vote just over a century ago, and yet half of the planet’s population still faces outdated taboos every day.

Women are still required to tiptoe around the realities of their own lives (we’re looking at you periods, body hair and pay gaps!). Just by existing on this planet, women are automatically at a disadvantage. In fact, women are often oppressed before exiting the womb — gender-reveal parties and sex-selective abortions are pretty powerful examples of why we still need to fight so hard for equality.

Unfortunately, the list of stigmas women face on a daily basis is too long to tally up here, but we’ve chosen 10 stigmas that still exist — and seriously shouldn’t.

All you have to do is watch a tampon commercial to understand just how uncomfortable society is with menstrual blood. Never have I met a woman who bleeds transparent blue, and yet young women are being taught that the reality of bleeding red blood monthly is so shameful and dirty that the only way to approach it is to pretend it doesn’t exist. (Thankfully some ads are moving towards showing red liquid.)

Young girls who don’t have access to pads often won’t go to school during their periods, which is enough to stand in the way of millions of dreams and aspirations. In a bid to normalize periods, Vanessa Matsui, actor-writer, proud feminist and creator of award-winning web-series Ghost BFF, launched Crankyfest: an online film festival for girls and women to help dispel the stigma around menstruation.

Matsui believes we need to speak openly about periods because they are totally normal. She says, “I actually feel like we can go a step beyond periods being normalized to them being celebrated, or at least respected! Periods deserve some respect, dammit! The implication is that being female is still othered instead of being the standard or the norm.”

Gender bias continues to be responsible for the unjustifiable wage gap in the Canadian workforce and in other developed nations across the world.

Women still earn less than their male counterparts for doing the same job, and the earnings of Black, Indigenous and people of colour are even more severely impacted.

2:00
How high the gender wage gap is in Canada


Women can also be overlooked for important assignments more than men, and can be perceived to have given into sexual bribes when they’ve climbed the proverbial corporate ladder. Additionally, women have to suck up the possibility that having a child will likely damage their careers. Workplace gender biases eat away at women’s confidence and make it difficult to truly get ahead, which might explain why only 7.4 per cent of Fortune 500 companies are run by women, with only three of these women being people of colour.

See also: The gender pay gap is still alive: here’s how we bridge it.

Fewer and fewer women are procreating these days, but societal pressure for women to take on motherhood still very much exists.

People can be pretty quick to judge why a woman might not have kids: is she infertile? Is she a workaholic? Is she just too selfish? Is there something wrong with her? But how often are men questioned about why they don’t have children?

Society is constantly searching for some big explanation to understand why a woman doesn’t have children, despite growing evidence that more and more women are consciously opting out of having kids. In one analysis of 40 years of data of 50-to-70-year-olds, researcher Nicholas H. Wolfinger found that women with two children are less happy than their child-free counterparts by four percentage points, and women with one child were even less happy than that. We need to acknowledge that women can be fulfilled and happy without bearing children — a fact that should be supported and accepted.

You may also like: Famous childfree women who chose not to have kids.

How many body hair removal commercials have you seen that show actual hair on actual women? (Yes, that was a rhetorical question!)

Body hair on men is considered sexy, natural and manly, while on a woman it is thought of as unfeminine and ugly. This can make women feel their body hair is too controversial and unappealing to show.

People are so uncomfortable seeing women with underarm, leg or facial hair that they automatically assume they must be feminists or lesbians. Luckily, there are some brave body brands, like Billie, that are crusading against the hairless female stereotype and show real BIPOC women with real hair in their ads. The first step towards de-stigmatizing natural body hair on women is to acknowledge that we all have it and start showing it, not only in advertising, but also in the real world.

The gender orgasm gap is another major gender inequality that has programmed people to prioritize the male orgasm. In heterosexual intimate relationships, women have way fewer orgasms than men.

In one study of 800 college students, only 39 per cent of women reported always or usually experiencing an orgasm in partnered sex, versus men, who reported a 91 per cent orgasm rate during partnered sex. Meanwhile, women in same-sex relationships experience more orgasms than their straight sisters. Taking agency over our sexual pleasure is a much more complicated process than just doing so, especially when there is so little focus on how healthy and normal female pleasure is.

As if it’s not challenging enough simply being a woman, when you’re an outspoken Black woman the entrenched fears of modern society become obvious. Michelle Obama experienced this first-hand when on the presidential campaign trail with her husband, Barack Obama, in 2008. Michelle was consistently labelled an angry Black woman for being passionate, articulate and outspoken, particularly around issues like gender and racial inequality.

By calling out hard truths and highlighting areas for much-needed change, Michelle was accused of emasculating her husband.

The need for women everywhere, and particularly BIPOC women, to censor their anger and outrage is an upsetting reality that really needs to shift. Luckily, women like Michelle Obama are smashing the stereotype so that the strong, passionate, powerful BIPOC women who come after her might not have to fight quite so hard to be heard and understood.

Related: Meghan Markle and the struggle among Black women everywhere.

Whether women are able and choose to breastfeed — or don’t — there will always be someone who judges their choice. Breastfeeding is by far one of the hardest things new parents face. Postpartum, BIPOC women come up against added difficulties, as they are less likely to be offered breastfeeding support and more likely to be swayed towards formula feeding.

Women who breastfeed in public without a whole fortress of cover still get awkward and uncomfortable looks, and even demeaning comments, from passers-by. Women who don’t breastfeed at all, or breastfeed for any less than the recommended year, are criticized for being selfish or depriving their infant.

5:06
Breastfeeding tips for new moms and how you can support your partner


Luckily, there are trailblazers supporting and normalizing breasts, like Mother, an independent London-based agency. These fine folks partnered with Elvie, the creators of the world’s first silent wearable breast pump for Mother’s Day, and erected five massive inflatable breasts in a variety of sizes and skin tones in busy parts of London to help empower women to breastfeed confidently and fight the antiquated stigma of public breastfeeding.

See also: How Black women can advocate for themselves in a healthcare system that ignores them.

From before they can even talk, girls are taught that their looks dictate their worth. Girls are far more likely to be praised for how pretty, cute or princess-like they are, vs. how brave, smart and strong their male counterparts are.

Nearly half of girls aged seven to 21 interviewed in a Girlguiding poll in the UK said they didn’t feel they could speak freely because of their gender and that this directly affected their participation in school. Think of all of the brilliant ideas lost because young women are made to feel uncomfortable or fear they won’t even be heard just because they are girls.

BIPOC girls are often the victims of institutional racism and are more likely to be unfairly punished and then boxed into an even more detrimental stereotype.


While the tide is changing slowly, girls everywhere are still discriminated against, made to feel that their only virtues relate to their appearance and that subjects like science, math and sport are for boys.

It is vital that we continue to challenge gender stereotypes by speaking up and calling out educators who pressure children to conform to archaic notions of what makes a girl a girl, and a boy a boy. Maybe then girls can grow up, becoming the women they really want to be and not who society thinks they should be.

Once a woman passes a certain age, typically as her child-bearing years come to a close and beyond, she is likely to suffer from Invisible Woman Syndrome. This syndrome is a social phenomenon where the woman fades into the background, feels ignored or becomes irrelevant in society. Having spent her youthful years birthing and raising babies, her work as a woman is considered done and she is therefore no longer considered necessary.

It can be a socially alienating and depressing experience for older women who are often just beginning to live their best lives, but who are made to feel worthless. With age comes experience, wisdom, success and achievement and if a woman does find herself in a position of power, she has to work extra hard to prove herself, often dealing with a disproportionately high level of physical scrutiny.

Take Hillary Clinton, whose Ivy League education, ambition and successful career was still not enough for the sexist media that criticized her for not fitting the traditional wife and mother mould. At the time, Clinton was consistently lambasted for her choice of clothes and hairstyle. We can break the cycle of invisibility by not only noticing older women, but by giving them a compliment, acknowledging their wisdom and being excited to learn from them.

Related: 13 female celebs who clapped back at sexism.

Feminist. The very word makes people squirm. By advocating for social, economic and political equality of the sexes, women are stigmatized and can be perceived as angry, fist-waving, men-hating radicals with armpit hair.

The core of feminism is gender equality. Intersectional feminism brings awareness to how peoples’ social identities overlap and can lead to even more discrimination (white cis women may not have as many opportunities as white cis men, but systemic racism and homophobia compounds a Black lesbian’s experience with discrimination).

Because there are negative connotations to the word feminist, many women feel uncomfortable disclosing they’re feminists unless in the company of other feminists — a disturbing fact that further oppresses women and stalls the progress for women’s rights and minority women’s rights. So, not only do we need feminism, we need intersectional feminism.

Related: What is climate feminism — and why Indigenous women should lead the solutions.

In Honor of Groundhog Day: 5 Hilarious Times Bill Murray Made Someone’s Day a Little Extra
The World’s Best Blind Mountain Biker | Brian Bushway | #shorts
Small Town Shocked to Learn Army Veteran Was Secretly Paying Stranger’s Bills for a Decade
Garmin Canada announces Alberta expansion despite other tech turmoil
8-Year-Old Boy’s Family Is Down to Their Last $12 Living in a Shed – Until His Own Business Saves Them All